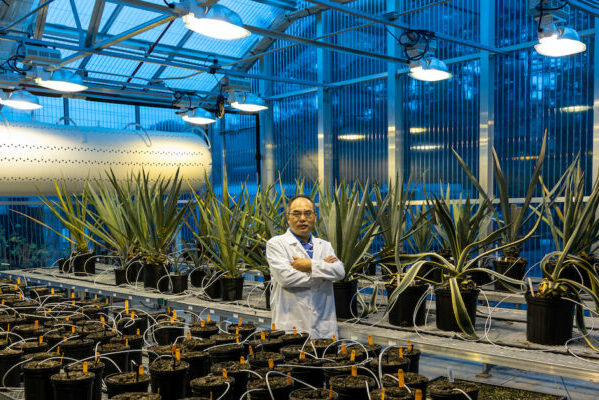 Scientists at Oak Ridge National Laboratory have discovered a single gene that simultaneously boosts plant growth and tolerance for stresses such as drought and salt, all while tackling the root cause of climate change by enabling plants to pull more carbon dioxide from the atmosphere.

As climate change triggers more frequent and longer-lasting droughts, water scarcity concerns are escalating. Only about 3% of the world’s water is freshwater, and much of that is frozen in ice or otherwise unavailable to use. Agriculture is the biggest freshwater consumer worldwide, which emphasizes the need for hardier plants that can withstand drier conditions and use non-potable water containing higher levels of salt.

With the aim of engineering more productive and drought-tolerant bioenergy crops, ORNL scientists at the Center for Bioenergy Innovation, or CBI, have been studying the mechanisms that allow desert plants, such as agave and kalanchoe, to thrive in dry conditions.

Desert plants use a form of photosynthesis known as crassulacean acid metabolism, or CAM, to hold carbon dioxide in their cells overnight to be turned into sugars in the daylight hours. To survive extreme desert temperatures, CAM plants only open their stomata, or leaf pores, to capture carbon dioxide during the night and keep them closed during the heat of day, avoiding water loss.

An ORNL team identified the key genes for CAM photosynthesis in 2017 using the laboratory’s Titan supercomputer. Building on that study, researchers homed in on a novel variant of an important enzyme and found that it triggers two pathways simultaneously — one for carbon fixation and plant growth and another that produces proline, a key amino acid known to increase stress tolerance. Their results are published in the journal Cells.

“It is unusual to find that a single genetic modification can have multiple benefits,” said ORNL’s Xiaohan Yang, a plant systems and synthetic biologist who led the study. “This is different than the classic model of one gene and one protein affecting one trait. We are seeing more examples of this phenomenon where a single gene acts as a master regulator that turns on many other genes both upstream and downstream from it.”

“Anything we can do to make bioenergy crops more drought tolerant and grow quickly has positive economic value,” CBI Director Jerry Tuskan said. “We are looking at dedicated energy crops that do not compete with food production. To do that, we’ll need to grow these crops on marginal lands that experience drought.”

The research team took a variant gene, AaPEPC1, from the desert plant agave that they had previously found expresses an important enzyme in CAM photosynthesis and engineered the gene into tobacco, which performs photosynthesis through a non-CAM pathway. The enzyme, phosphoenolpyruvate carboxylase, is critical for nighttime fixation of carbon dioxide. As expected, the gene allowed for greater capture of carbon dioxide, which fostered tobacco plant growth and biomass yield.

The surprise came when the team found that the increased biomass yield was consistent even under stress conditions. Results show that the dry weight of tobacco plants engineered with AaPEPC1 increased by about 82% under salt conditions and by 37% under drought stress compared with conventional tobacco.

“Usually, you can boost either biomass yield or stress tolerance, but not both,” Yang said. “The trade-off between the two has been a big scientific challenge.”

Further study revealed that expression of the AaPEPC1 gene and corresponding enzyme upregulated or turned on multiple genes in the CAM pathway for malate production that is critical to holding carbon dioxide in the cytoplasm, or fluid inside plant cells. The same gene upregulated another set of genes that make proline, increasing stress tolerance. The team is still examining the molecular mechanisms at play.

“These effects are most likely not specific to tobacco, so we need to do additional testing with other species,” Yang said. “Our results can set a foundation for future research targeting increases in sustainable production of biomass on marginal lands with benefits for both bioenergy and carbon sequestration.”

“We haven’t tested the gene in corn or soybeans,” Tuskan said. “Although they’re grown on high quality agricultural land, this discovery may have applications to extend their production in drier parts of the world as well.”

The research began under a biodesign project examining CAM photosynthesis and continued through the Department of Energy’s Center for Bioenergy Innovation at ORNL. Both activities were funded by the Biological and Environmental Research program within DOE’s Office of Science. The original project also received support through the Laboratory Directed Research and Development program.

UT-Battelle manages ORNL for the Department of Energy’s Office of Science, the single largest supporter of basic research in the physical sciences in the United States. The Office of Science is working to address some of the most pressing challenges of our time. For more information, please visit energy.gov/science.