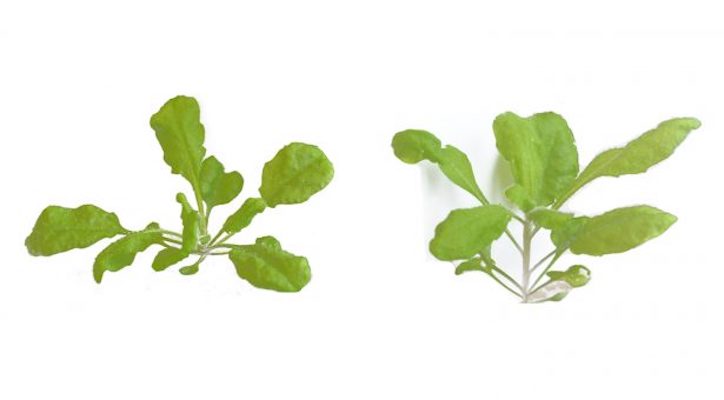 Shedding light on the long and the short of plant growth

What keeps some plants squatting close to the soil while others – even those closely related – reach high for the skies?

New research addressing the architecture and growth habit of plants has provided an answer to this question and may assist in the development of better performing crops.

The way plants grow must sometimes satisfy contradictory needs. Growing close to the ground, decreases the chances of being grazed, but this presents the need to rise rapidly to allow seeds to disperse. This can be observed in dandelions and in Arabidopsis, a model species commonly used to study plant development.

Agriculture has taken advantage of the diversification of growth habit so that we observe in brassicas for example, a rich and varied assortment of shapes from the compressed rosette growth of cabbages to the tall rangy outlines of crops such as oilseed rape.

This study by John Innes Centre researchers reveals the genes that control changes in growth habit.

To convert compact growth to elongated growth, both types of genes need to be turned off. When active, either of them can stop the activity of well-known genes that normally promote elongated growth, for example, in response to light conditions.

Professor Robert Sablowski Group Leader and corresponding author of the study said: “It is well known that the way plants grow depends heavily on the environment. At the same time, each species of plant keeps its recognisable shape. We know a little about how responses to the environment are integrated with the genetic mechanisms that give plants their basic, characteristic shape, or morphology. Thanks to this study, we now understand how responses to the environment can be modified in specific parts of the plant to produce their characteristic shape.

“It was exciting to see that a relatively small number of genetic changes can convert the plant’s growth habit from one like cabbage to one like oilseed rape. It remains to be seen whether comparable changes explain the differences in growth habit we see in nature.”

A similar mechanism of two genes behaving similarly and affecting elongation has been found in rice, suggesting it might be a common mechanism to control plant architecture.

Genes that control plant height are important in agriculture with dwarfing traits underpinning the highly productive phase of the mid-20th century known as the green revolution. DELLA genes have been used extensively in crop breeding to improve yield and facilitate harvest.

A better knowledge of genes that regulate how tall the plant grows can lead to more precise ways to improve the shape of crop plants.

Next the researchers are planning to better understand how ATH1 itself is regulated.

“If we can alter the location or time when ATH1 is active, this could lead to useful ways to modify plant height and shape,” says first author Dr Mahwish Ejaz.

“We have shown that ATH1 and DELLA genes prevent stem growth in part by stopping the activity of genes that cause stems to elongate in response to light. But this is not the whole story – there are many other genes and processes that ATH1 and DELLAs regulate to change the growth habit, most of which remain unstudied,” she added.

In this study Stefano Bencivenga did initial experiments that identified genes controlled by ATH1, Mahwish Ejaz and Robert Sablowski did most of the experiments on the interaction between ATH1/DELLA and light responses, with additional experimental support from Max Bush and Rafael Tavares.

Image: The dendelion-like growth of wild-type Arabidopsis (left) is changed to a pattern more like oilseed rape when both ATH1 and DELLA genes are mutated (right). Credit: John Innes Centre