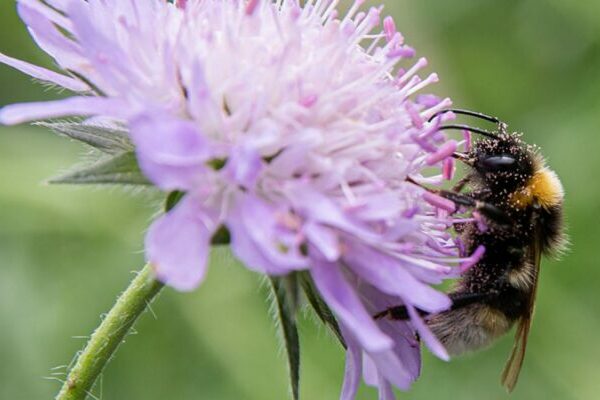 Insect decline is one of the greatest challenges facing our society. As a result of the destruction of many natural habitats, bees, bumblebees, butterflies, beetles and the like find less and less food. As a consequence, they are barely able to fulfil their role as pollinators of wild and cultivated plants. This trend is increasingly noticeable in agricultural regions in particular.

Researchers at the University of Münster have now taken a more detailed look at how the choice of seeds in restoration measures – i.e. the restoration of natural habitats at degraded land – affects how insects benefit from these measures. Here, not only the plant species plays an important role, but so does the geographical provenance of the seeds used – because the provenance influences not only insect diversity but also how often the pollinators visit flowers. The results of the study have been published in the “Journal of Applied Ecology”.

Insects are indispensable for the functioning of ecosystems – and for human survival. They are necessary, for example, for the pollination of many cultivated plants which are, in turn, an essential source of nutrition for humans. In regions characterized by agriculture or in built-up areas with settlements and cities, there are reduced resources available to pollinators. In order to support them in their pollination, flower-rich habitats are created in the landscape, often in the form of wildflower stripes.

When flower stripes or other habitats are created, however, it should be taken into account that plant species are not homogeneous entities, as their populations genetically differ. This differentiation often occurs as a result of population adaptation to their local environment. A brown knapweed, for example, which grows near the sea – where frost is rare – will be less frost-resistant than a brown knapweed which grows in the mountains, where frost is common. The differences can be seen in many plant traits, and some of these differences can influence pollinators, for example the number of flowers or the time when they flower. “Depending on the provenance, some populations flower earlier than others,” as Dr. Anna Lampei Bucharová from Münster University’s Institute of Landscape Ecology explains, who also lead the study. “When setting up habitats for pollinators, these within-species differences have so far often been neglected,” she adds, “and the plants are mostly selected regardless of their provenance. This is why we tested to see whether the provenance of the plants influences pollinators.”

The geographical provenance of the seeds plays a key role in this context. In a field experiment, the researchers formed small experimental plant communities which had exactly the same species composition but different provenances. The populations came from the Münster region, from the area around Munich and from greater Frankfurt an der Oder. They then recorded flowering data, observed the pollinators visiting these communities, and compared the frequency and diversity of the pollinators in communities with different provenances.

The researchers discovered that a plant’s provenance influences pollinators – both how often the pollinators visit flowers and also the diversity of the insect species. “The effect can be considerable,” says Dr. David Ott, co-author of the study. “We observed twice as many visits by pollinators at flowers of one provenance than at flowers of another provenance. The most important parameter driving this is the phenology of the plant’s flower – in other words, the temporal sequence of flowering,” he adds. The researchers conclude that plants from some provenances started to flower earlier and more intensively than others, and so they presented more flowers and, as a result, interacted more frequently with pollinators.

The results are important both for scientists and for ecological restoration. The researchers are confident that Germany provides good conditions for implementing provenance-based restoration strategies, because regional ecotypes of many species are readily available in the so-called “Regiosaatgut” (“regional seeds”) system. This system provides regional seeds for many species for up to 22 regions in Germany. Thus, by selecting the appropriate plant origins, resources for pollinators could be sustainably improved.