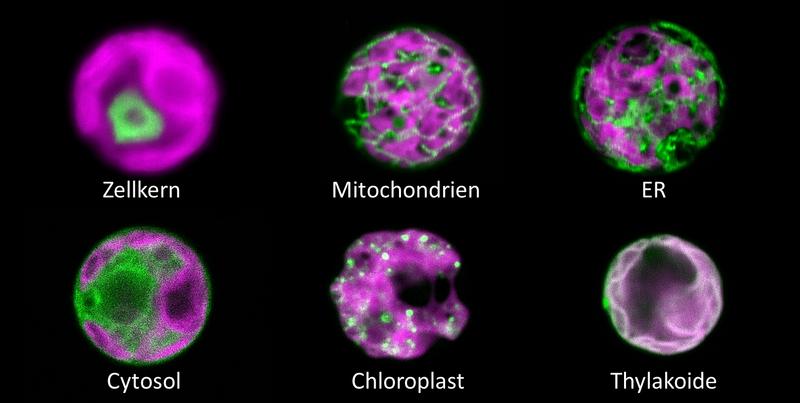 Hydrogen peroxide (H2O2) is commonly known as a bleaching and disinfecting agent. However, it is also constantly produced in living cells. Often as a byproduct of biological processes, sometimes intentionally, for example to kill pathogens. It is also thought that H2O2 plays an important role as a signaling molecule. To investigate this biological function, research teams from TU Kaiserslautern (TUK) and Saarland University have developed an H2O2-sensitive sensor for plant cells. The sensor reveals where in the cell hydrogen peroxide is produced and how the signaling pathways run. The work has been published in the renowned journal “The Plant Cell“.

Professor Dr. Michael Schroda, who holds the chair for “Molecular Biotechnology & Systems Biology” at TUK, explains: “We have developed a hypersensitive H2O2 sensor for the unicellular green alga Chlamydomonas reinhardtii. It is based on a variant of the green fluorescent protein, called roGFP2, coupled to a peroxidase. The trick is that the peroxidase is very efficiently oxidized by hydrogen peroxide and subsequently oxidizes roGFP2, causing a slight change in its fluorescent properties. This allows to read out changes in H2O2 concentrations in the living cell. We successfully introduced the sensor into six different cell compartments and monitored changes in H2O2 concentrations induced by changing environmental conditions such as light or heat stress in real time. We could show that chloroplasts produce H2O2 under strong light irradiation. This diffuses into the neighboring cytosol but not further into the nucleus because it is efficiently degraded.”

The research article recently published in the journal “The Plant Cell” resulted from a scientific team effort: Michael Schroda‘s research group teamed up with Professor Dr. Bruce Morgan from Saarland University and Dr. David Scheuring from the Department of Phytopathology at TUK. “Bruce Morgan brought his knowledge of the sensor protein established in yeast to the project; David Scheuring helped us visualize the production and distribution of H2O2 in the algal cells using state-of-the-art microscopy technology,” says Schroda. “My research group used genetic engineering methods to pave the way for introducing the sensor into specific compartments of the algal cell and track the influence of changing environmental conditions.”

The successfully validated sensor system is a product of synthetic biology – developed by researchers for researchers. “The system is modular, like a set of Lego bricks,” Schroda elaborates. “By breaking genes down into small functional units and adding defined connectors, we can assemble the units in any combination we want and build genetic circuits for our research purposes in no time.” The principle of standardized components, long known in the engineering sciences, thus ensures scientific progress in biology.

Image: The H2O2 sensor (green) in 6 compartments of a Chlamydomonas cell filled by the large chloroplast (magenta). Credit: AG Schroda