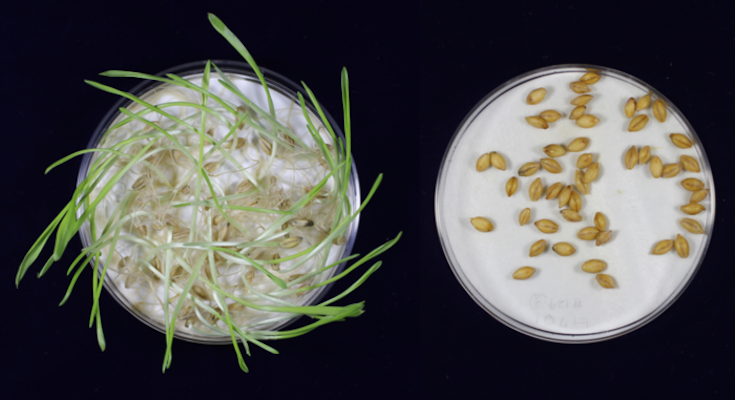 After a spell of unexpected rain, before the harvest season, a farmer may be faced with the unpredictable problem of untimely sprouting of barley. Sprouted barley fetches considerably low market prices and poses an economic burden on farmers and corporations that are at the mercy of nature to survive in the agriculture industry. The aggravation of climate change has not made this situation any better too.

The problem of pre-harvest sprouting, thus, has kept agricultural researchers occupied for long. Pre-harvest sprouting can be avoided by prolonged grain dormancy through genetic manipulation. However, such dormancy can interfere with malt production, and also cause non-uniform germination upon sowing. Balancing these issues is necessary for high-quality barley production, therefore.

Now, a team of scientists, led by Associate Professor Dr. Hiroshi Hisano from Okayama University, Japan, offer a solution to this age-old problem. To achieve the ‘perfect’ barley, they looked to the latest gene manipulation technology—CRISPR/Cas9-based gene editing. Speaking about their motivation to pursue the art of perfecting barley, Dr. Hisano says, “We recognized the need to strategically manipulate crops to weather the effects of steadily exacerbating climate change. Since our collaborative research group had already developed expertise in precision genome editing of barley, we decided to go with the same initially. Also, previous studies have pinpointed specific grain and seed dormancy genes in barley, called Qsd1, and Qsd2. Hence, our modus operandi was pretty clear.” Their findings have been published as a research article in Plant Biotechnology Journal.

To achieve the barley of interest, Dr. Hisano and his team genetically manipulated samples of ‘Golden Promise’ barley using CRISPR/Cas9 targeted mutagenesis, to be either single mutants (qsd1, or qsd2), or double mutants (qsd1 and qsd2). Then, they proceeded to perform germination assays on all mutants and non-mutated samples.

Subsequently, the results they obtained for mutants, when compared to non-mutants, was extremely interesting. All the mutants showed delayed germination, but there were mutant-specific or conditional properties. Germination of mutants was promoted by 3% hydrogen peroxide treatment; exposure of all mutants to cold temperatures largely promoted germination, indicating that the grains of the mutants were not dead but had been dormant longer. The qsd1 mutation in single mutants partially reduced long grain dormancy, owing to qsd2; and qsd2 mutants could germinate in the dark, but not in the light. Also, all mutants showed abscisic acid build-up, consistent with conditions observed with delayed germination. Notably, this abscisic acid build-up in itself cannot maintain long-term grain dormancy, the latter being important for high-quality barley production.

The researchers are ecstatic to have hit gold in their plant biotechnology endeavor. Dr. Hisano exclaims, “We could successfully produce mutant barley that was resistant to pre-harvest sprouting, using the CRISPR/Cas9 technology. Also, our study has not only clarified the roles of qsd1 and qsd2 in grain germination or dormancy, but has also established that qsd2 plays a more significant role.”

Overall, this study serves as a milestone for present and future crop improvement research, using efficient gene manipulation like that offered by CRISPR/Cas9. The researchers are hopeful that they may be able to solve the food and environmental problems that human beings are currently facing worldwide, using their enhanced biotechnology techniques.

For a better beer, the world hopes with them!