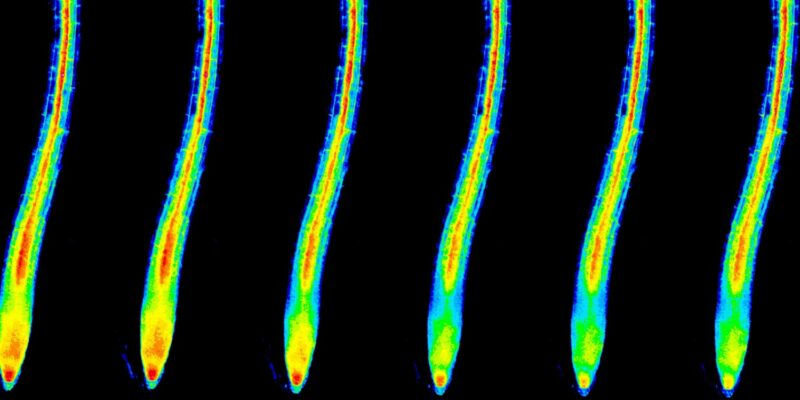 Researchers show where and how plants detect the nutrient potassium

Potassium is an essential nutrient for all living things. Plants need it in large quantities, especially for growth and in order to withstand stress better. For this reason, they absorb large quantities of potassium from the soil. In agriculture, this leads to a lack of available potassium in the soil – which is why the mineral is an important component in fertilizers. A team of German and Chinese researchers has now shown, for the first time, where and how plants detect potassium deficiency in their roots, and which signalling pathways coordinate the adaptation of root growth and potassium absorption to to uphold the plants potassium supply.

The background: The absorption and transportation of potassium at the level of individual cells have been relatively well characterized, and many of the molecular structures and mechanisms which play a role in these processes are known. Also, researchers demonstrated decades ago that plants adapt very specifically to potassium deficiency. One puzzle that still remains, however, is how plants detect the availability of potassium in the soil and which mechanisms are behind the adaptational reactions in the plant’s organism. The new study sheds light on these questions. The results have been published in the journal “Developmental Cell”

The researchers examined thale cress plants (Arabidopsis thaliana) which were transformed with the newly developed potassium reporter protein GEPII. This reporter protein enables the microscopic detection of the concentration and distribution of potassium ions in cells and tissues. Even when there was no potassium deficiency, the research team made a very surprising discovery: the concentration of this nutrient in the cytoplasm of the cells increased with each cell layer within the root, from the outside to the inside.

“These observations were really surprising,” says Prof. Jörg Kudla from the Institute of Plant Biology and Biotechnology at the University of Münster. “They contradict the textbooks, which say that the nutrients are passed on evenly, from the outside to the inside, towards the root’s vascular tissue – not only from cell to cell but also through the intercellular spaces.”

Visualizing the path of potassium

Simultaneously with the decrease in the potassium concentration in the potassium-sensitive niche, calcium signals occur in these cells and spread out in the root. As a messenger substance, calcium controls many processes in living organisms – just as it does here: the calcium signals start off a complex molecular signalling cascade. This chain of signals, which the researchers were the first to define in detail, ultimately causes not only an increased formation of potassium transport proteins, but also brings about changes in tissue differentiation in the root. This facilitates a more efficient absorption of potassium ions and maintains its distribution in the plant. “For the first time,” says Kudla, “using imaging methods, we have visualized the path of potassium in a living organism.”

The results provide fundamental insights into where plants detect the availability of the essential nutrient potassium and how they adapt to it. Understanding these processes could in future help to breed better plants for agricultural purposes and deploy fertilizers in a more tailor-made way.

To visualize the distribution of potassium in the plant’s roots, the researchers used special microscopic methods (for example, Förster resonance energy transfer, FRET), in combination with sensor proteins for potassium, calcium and hydrogen peroxide. In order to examine the molecular mechanisms, the researchers produced and compared transgenic Arabidopsis plants which, due to different genetic mutations, showed symptoms of potassium deficiency. They used a variety of genetic, molecular-biological and biochemical methods to identify and characterize the proteins and mechanisms involved in the transmission of the potassium and calcium signals.