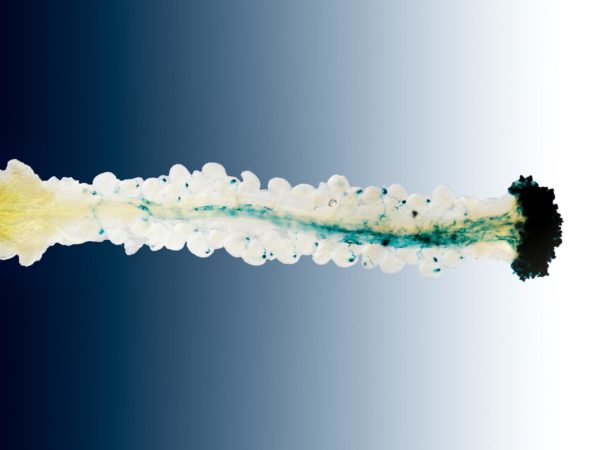 Researchers at the University of Maryland (UMD) have discovered an entirely new role for a well-known plant molecule called ACC, providing the first clear example of ACC acting on its own as a likely plant hormone. Just like in humans and animals, hormones in plants carry messages to signal and trigger essential processes for plant health and functionality, from reproduction to defense. Without these processes, crops can’t reproduce and thrive to provide the food we need to feed a growing global population. In a new publication in Nature Communications, researchers show that ACC has a critical role in pollination and seed production by activating proteins similar to those involved in nervous system responses in humans and animals. These findings could not only change textbooks that have previously attributed plant responses to the hormone ethylene instead of ACC, but could also open the door for new research to improve plant health and crop yield.

“There are several novel things about this paper,” explains Caren Chang, UMD. “But the main impact is that it introduces a new plant growth regulator or plant hormone, alongside a small handful of other publications. It isn’t a newly identified molecule, but it has never been thought of before as a plant hormone, only as the precursor to ethylene.”

Chang, a professor in Cell Biology & Molecular Genetics and affiliate professor of Plant Science & Landscape Architecture supported by the Maryland Agricultural Experiment Station (MAES), explains that ethylene is one of the five major plant hormones and has been studied for over a century. It is important for many processes that are vital to plant health and crop production, including fruit ripening, stress responses to flooding and drought, plant disease defenses, germination, and flowering.

“In much of the research, ACC has been used in place of ethylene, knowing that it’s a precursor that plants convert into ethylene. This is because ACC is easy to work with in powder form and can even be sprayed on the plant, but working with ethylene is very difficult because it is a gas. So researchers have used ACC for decades in place of ethylene, and the literature would interpret the observed responses as ethylene responses. What our paper shows is that an ACC response is not necessarily an ethylene response. While ethylene is an important plant hormone with its own set of functions, some of these responses that have been attributed to ethylene through ACC may actually be separate ACC responses, acting as a growth regulator or hormone itself.”

This finding opens the door for many papers across decades of research, as well as textbooks and future education on plant hormone responses, to be revised in the event that ACC is actually triggering important plant processes previously attributed to ethylene.

According to Chang, the paper also presents advances in plant reproduction. “In the plant reproduction field, there are many steps that are critical in pollination, and one requires the pollen to reach the ovules to actually produce a seed,” says Chang. “Our paper shows that ACC signaling in the ovule is involved in getting the pollen tube to turn and effectively deliver the pollen, which makes it essential for seed production. It’s probably the first example showing how the maternal ovule tissue actually helps attract the pollen tube.” And this isn’t a small effect, Chang stresses. “The seed number pretty much doubles in the presence of ACC. There is potential here to improve the seed number, which can increase food production in certain crops and have an impact on food security long-term.”

“The most interesting parallel is cell-cell communication,” explains Feijó. “Animal glutamate receptors are proteins which are needed for information to jump from one neuron to the next, either through an electric impulse or through calcium signaling, which is essential for things like memory. Problems in the processes mediated by glutamate receptors are known to be related to neurodegeneration and depression.”

This finding opens an entirely new avenue of research in plant biology and points to similarities in plants and humans that are currently not well understood. “In plants, GLRs all seem to convey functions related to communication, either to bring male and female genes into an egg, or in pathogen or stress alert systems and defenses,” says Feijó. “Emerging trends suggest that GLRs underlie long distance electric signaling through the plant vascular system, where injury to tissues in one leaf inform the whole plant to create nasty substances to deter insects. All these lines seem to point into the existence of electric communication within plant tissues and organs, and that these functions involve GLRs. This is an interesting parallel evolution of a function for glutamate receptors as they evolved to be associated with the animal nervous systems to perform similar functions.”

With ACC as a new candidate activating GLRs and all the newly discovered roles it is playing as a plant hormone, Chang and the team are excited about the directions this work can go. “There is still a lot of research to be done to see how this is all happening and can be used in different crops, but all that new research can happen now.”

Image: ACC facilitates fertilization. Pollen tubes (stained in blue) fertilize only some of the ovules in the presence of less ACC. Successful fertilization is seen as blue dots inside the white ovules. Credit: Dr. Wangshu Mou