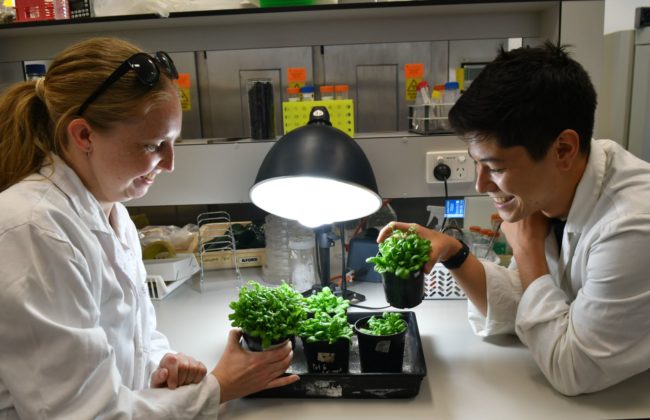 Success with improving a model plant’s response to harsh conditions is leading plant molecular researchers to move to food crops including wheat, barley, rice and chickpeas.

“With heatwaves, drought and salinity becoming more and more of an issue, plant biologists around the world are increasingly looking for ways to equip plants to be tolerant to multiple environmental stressors,” says Strategic Professor in Plant Biology David Day.

“Our research is proof of concept using the test plant Arabidopsis (Arabidopsis thaliana) that manipulating mitochondrial respiration is an important way to manage a plant’s response to abiotic stresses.”

The researchers focused on two enzymes, which act together to moderate oxidative damage in the leaves of the model plant.

“These proteins act on the cellular energy core or mitochondria to minimise damage caused by drought or other stressors,” says Dr Crystal Sweetman, one of the lead authors on the new paper in Plant Physiology.

“Therefore, plants bred to make more of these enzymes might be able to survive extreme heat or prolonged dry weather and have a better chance at producing food during bad seasons,” she says.

Flinders Professor Kathleen Soole, who is also president of the Australian Society of Plant Scientists, says the methodology has shown its value and can now be adapted for more complex genetics in grains and legume food staple crops.

“The research has shown that by affecting the metabolism of plant cells with two novel antioxidant enzymes allows them to recover better after exposure to drought,” Professor Soole says.

Flinders Associate Professor Colin Jenkins is keen for this work to be move to food crops like cereals. “This paves the way the selection of existing crop varieties with higher activities of these enzymes and for similar genetic manipulation of crop plants such as wheat and barley,” says plant molecular researcher Associate Professor Jenkins.