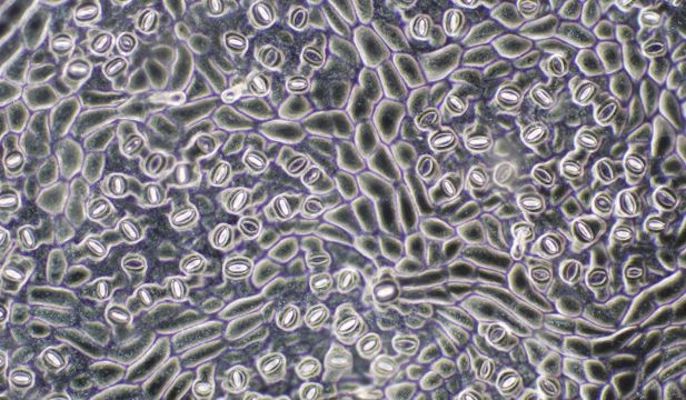 New research has shed light on when plants first evolved the ability to respond to changing humidity in the air around them, and was probably a feature of a common ancestor of both flowering plants and ferns.

Key to the regulation mechanism are tiny holes, or pores, on the surface of leaves, called stomata. These enable the plant to regulate the uptake of CO2 gas as fuel for photosynthesis, and the loss of water vapour – a constant balancing act that requires the pores to open and close according to changing conditions. This ability is important to agriculture because it helps crops to use less water to grow.

Plants first evolved stomata soon after they moved from water to land, some 450 million years ago, but scientists are still uncertain about the evolutionary pathway they took and the point at which plants became able to choose whether to open or close the pores in response to their environment.

In the most recently evolved plants – flowering plants – stomata closure in response to drought is actively triggered by a number of internal signals, including a hormone called abscisic acid (ABA), but scientists have been struggling to understand if this mechanism is also present in older groups of plants. In a new study, published in Current Biology, researchers at the University of Birmingham have found evidence that the fern species Ceratopteris richardii actively closes its stomata using similar signals.

This semi-aquatic tropical fern has recently become the first model for exploring genetic control of development in the fern family, and is now helping scientists to unpick the long evolutionary history between the earliest land-living plants (mosses, liverworts and hornworts) and the modern flowering plants that dominate today’s ecosystems.

The team used RNA sequencing technology to identify the genetic mechanisms behind different stomatal responses and was able to demonstrate the fern’s ability to close stomata in response to low humidity or in response to ABA involves copies of genes already known to control stomata in flowering plants.

The results suggest that both ferns and flowering plants evolved using similar stomatal closure methods. This indicates that these mechanisms were present – at least in some form – in the stomata of the last common ancestor of both groups.

Dr Andrew Plackett, of the University of Birmingham’s School of Biosciences and Birmingham Institute of Forest Research, led the research in collaboration with groups at the University of Bristol and the University of Oxford. He said: “We know that plants have possessed stomata for most of their evolutionary history, but the point in evolution where plants became able to actively open and close them has been controversial.

“We’ve been able to show the same active closure mechanisms found in flowering plants are also present in ferns, a much older group of plants. Being able to better understand how these mechanisms have changed during plant evolution gives us useful tools to learn more about how they work. This will be important for helping our crops to adapt to future environmental changes.”