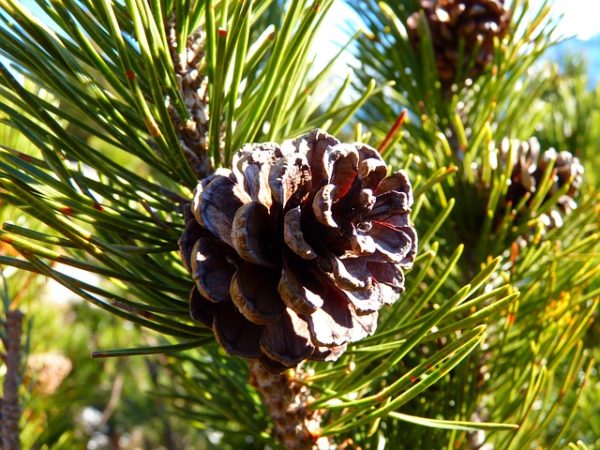 Not all pine trees are created equal when it comes to fending off their mortal enemy, the mountain pine beetle.

A new University of Alberta study shows that lodgepole pine trees with larger resin ducts survived beetle attacks that killed trees with smaller ducts. Located in the needles, branches, trunk and roots, the ducts act like highways to carry sticky, toxic resin to whatever part of the tree is being attacked.

The discovery, published in Frontiers in Plant Science, sheds new light on why some trees survive mountain pine beetle attacks while others don’t, said lead author Shiyang Zhao, a research assistant in the Faculty of Agricultural, Life & Environmental Sciences.

The wood-boring insect has killed millions of hectares of pine forest in British Columbia since its population exploded in the late 1990s and spread to Alberta in 2006.

Most research has focused on how the lodgepole pine uses its volatile chemicals against the mountain pine beetle, but the U of A study is the first to show that resin ducts are critical to tree survival in Western Canada.

Though it’s not known why some lodgepole pine trees have larger ducts, it’s likely based on an evolutionary response to bark beetle attacks and gives new insight into how the tree responds to attack, said forest entomologist and study co-author Nadir Erbilgin.

“Resin duct measurements from wood cores provide us a whole-life record of the energy trees put into defending themselves, and this information helps identify and select pest-resistant trees, and also indicates what to expect from pine forests under climate change in the future,” he said.

Zhao studied lodgepole pines from 31 forested sites around Grande Prairie, Whitecourt and Manning that had been attacked by the mountain pine beetle from 2006 to 2011 and found that surviving trees had larger ducts that were likely able to produce, store and transport more of the resins needed to trap the beetle and seal off wounds within a short time of attack.

The study also showed that the larger ducts were still protecting trees several years after bark beetle outbreaks, because those that survived had less competition for soil nutrients and were able to maintain and even grow their ducts.

While there’s no single tree characteristic that can protect against mountain pine beetle attacks, government and the forest industry could potentially use seeds from the trees with large resin ducts to regenerate stands blighted by beetle attacks, Zhao said.

“We’d see more beetle-resistant pine stands than ever before, which would mean a more resilient ecosystem and less loss of timber in the future.”