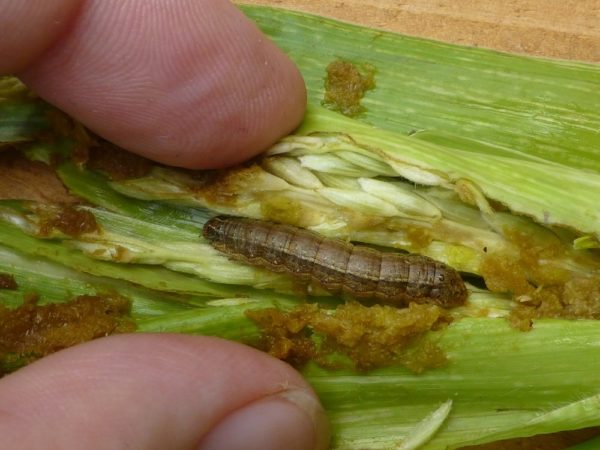 A new CABI-led study is calling for governments to reallocate subsidies to encourage the use of lower risk control options – such as biopesticides – in the fight against the devastating maize pest fall armyworm (FAW).

The research, which was spearheaded by Dr Justice Tambo and published in the journal Science of the Total Environment, also suggests that the enforcement of pesticide regulations is also needed to curb the use of highly toxic and banned products such as monocrotophos, dichlorvos and methamidophos.

Dr Tambo and his team also argue that mass media campaigns and the training of plant health advisory service providers is essential to inform farmers about the recommended pesticides for FAW control, risks and safety precautions, as well as alternative and more sustainable management options.

The advice follows surveys carried out amongst 2,356 maize-growing households in Ghana, Rwanda, Uganda, Zambia and Zimbabwe which revealed that while a variety of cultural, physical, chemical and local options are employed to mitigate the effects of FAW, the use of synthetic pesticides remains the most popular option.

The scientists found, for example, that across the five countries the use of synthetic pesticides ranged from 33% in Zimbabwe to 87% in Rwanda. In respect of biopesticides, only 22% of farmers in Ghana used them compared to less than 5% in the other four countries.

Where a variety of cultural, physical, chemical and local options to mitigate the effects of FAW were used these included, particularly in Rwanda and Uganda, the handpicking of egg masses and caterpillars and the destruction of infested maize plants.

Farmers also avoided late or staggered planting; carried out regular weeding to remove alternative host plants such as pasture grasses; applied manure or inorganic fertilizer to support healthy plant growth so that the maize plants could withstand FAW infestations; and intercropped and rotated maize with non-host crops such as cowpea and cassava.

In addition, the researchers express concern at the low use of personal protective equipment (PPE) used by farmers when applying the pesticides (e.g. half of farmers in Ghana did not use PPE at all) with almost 30% suffering from headaches and 20% skin irritations and dizziness.

Dr Tambo said, “Given the lack of knowledge and experience related to FAW, the rapid build-up of the pest, the devastating havoc it is wreaking on farms and the absence of resistant varieties, there is a tendency of farmers to opt for pesticides, which are generally effective against most pests and offer rapid control.

“However, recognising the negative effects of synthetic pesticides on humans and the environment, biopesticides have been recommended as an appropriate alternative option but these need to be incentivised for farmers to adopt them as part of an Integrated Pest Management (IPM) plan.”

The scientists also suggest it is necessary to test the effectiveness of the various FAW management practices identified and to intensify research efforts into other low-cost and low-risk IPM options. These include resistant maize varieties and biological control which have shown great potential for FAW control elsewhere but are not yet options for farmers in Ghana, Rwanda, Uganda, Zambia and Zimbabwe.

Dr Tambo added that a relatively high use of biopesticides was observed in Ghana, where there is an ongoing national effort to promote this option for FAW control, but stated that there was almost no adoption of biological control using predators and parasitoids for the management of FAW by any of the smallholders in their sample.

Read the paper: Science of the Total Environment

Image: fall armyworm on maize – a favourite crop of the pest and one of up to 353 different plant species it feeds upon. Credit: CABI