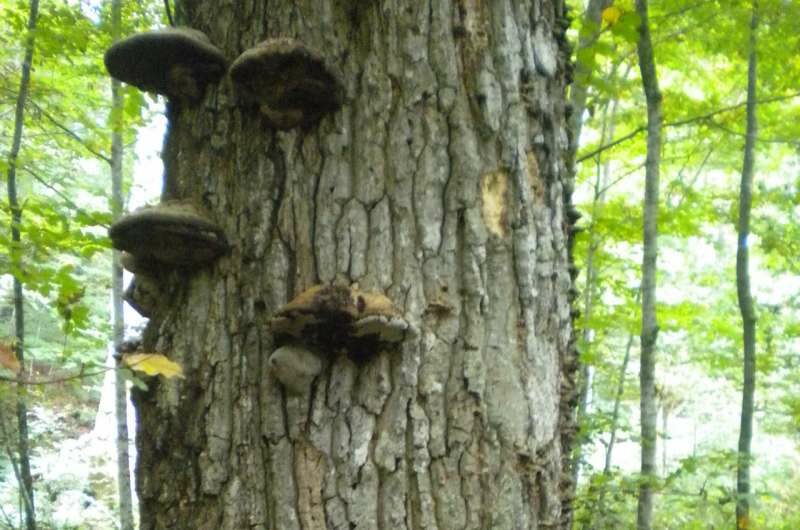 European old-growth forests are estimated to occupy only 0.7% of the total forested area; they are of prime ecological value, representing small vestiges of how Europe’s past primeval forest may have looked. In addition, old-growth forests provide various and important ecosystem services, such as biodiversity maintenance, long-term carbon storage, and landscape uniqueness. Therefore, old-growth forests represent valuable natural laboratories for evaluating how trees of different dimensions and ages respond to global change drivers, including climate warming and land-use changes. Although there is increasing attention on these ecosystems, knowledge of the long-term impacts of climate change in the Mediterranean environment is still limited. A recent study published in Science of The Total Environment , led by the University of Basilicata (Italy) and Pyrenean Institute of Ecology (CSIC, Spain), in collaboration with researchers from the University of Tuscia (Italy) and Pollino National Park (Italy), found that in Mediterranean mountainous area old-growth forests show remarkable resistance to climate warming.

The Pollino National Park: An ideal setting for studying the climate change impact

The first author from Pyrenean Institute of Ecology says that “the study has been carried out within the Pollino National Park, the largest protected area in Italy. We analyzed two conifer species (Abies alba and Pinus leucodermis) and two hardwood species (Fagus sylvatica and Quercus cerris) that were sampled along an altitudinal gradient, ranging from a drought-limited low-elevation hardwood forest to a cold-limited subalpine pine forest. Using a dendrochronological method we characterized radial growth dynamics of old versus young age trees.”

“The sites were selected for their biological and ecological values, representing an exceptional example of an intact and ancient forest in Europe thanks to the presence of large trees, standing dead trees, abundant woody debris on the ground, and high structural heterogeneity,” says Aldo Schettino from Pollino National Park. “Notably, some of the oldest dated trees in Europe (P. leucodermis, F. sylvatica) have been found in the Pollino massif. These stands are restricted to mountain sites characterized by irregular topographic conditions (i.e., steep slopes and shallow soils), which allowed them to be nearly untouched for centuries. The very few cases of traditional livestock and silvicultural activities were abandoned over the past century, contributing to their transition to increasingly natural conditions.”

Mediterranean old-growth forests: A treasure chest of biodiversity and resistence to climate change

“This result constitutes a relevant finding in contrast to what is happening in the Mediterranean environment where various forest ecosystems are threatened by climatic extreme events showing clear signs of growth decline and dieback phenomena with negative consequences in terms of carbon sequestration, biodiversity, and ecosystem services,” says Francesco Ripullone professor of Ecology at the University of Basilicata. “However some differences have been found depending on tree taxa and local climatic conditions. P. leucodermis showed marked growth enhancement in response to warming at cold sites; while, old trees of low-elevation hardwood forests showed stable growth behavior, highlighting the ability of F. sylvatica, A. alba, and Q. cerris to acclimate to warming in the Mediterranean mountains.”

“The presence of young and old cohorts in the same stand represented a unique opportunity” says Gianluca Piovesan professor of Forest Ecology at the University of Tuscia. “We found evidence for a fast-growth trend in young individuals compared with that in their older conspecifics. Studying and monitoring the growth performance of young trees in association with old trees is a strategic task to track old-growth functioning in the face of global change. The conservation of mountain ecosystems represents an important target (15.4) of Agenda 2030. These findings could have also relevant applied implications in the carbon cycle mitigation and in biodiversity conservation supporting programs for restoring forest naturalness.”

Read the paper: Science of The Total Environment