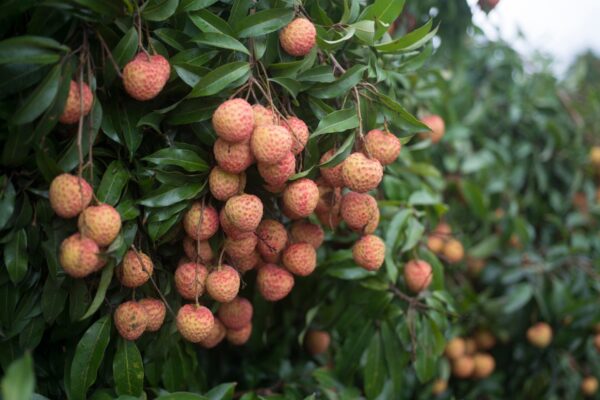 Radiant and flavorful, lychees were so beloved that they were domesticated not just once in ancient times, but independently in two different regions of China, a study finds.

They’re prickly on the outside, sweet on the inside, and beloved for their iconic pink shells and pearly, fragrant fruit. In the U.S., you might encounter them as a flavorful ingredient in bubble tea, ice cream or a cocktail. You can also peel them and eat them fresh.

Lychees have been grown in China since ancient times, with records of cultivation dating back about 2,000 years. Fresh lychees were an object of such desire that in the Tang Dynasty, one emperor set up a dedicated horse relay to deliver the fruits to the imperial court from harvests made far to the south.

Now, scientists have used genomics to peer even deeper into the lychee’s history. And in the process, they’ve uncovered insights that could help shape the species’ future, too.

“Lychee is an important tropical agricultural crop in the Sapindaceae (maple and horse chestnut) family, and it is one of the most economically significant fruit crops grown in eastern Asia, especially so to the yearly income of farmers in southern China,” says Jianguo Li, PhD, professor in the South China Agricultural University (SCAU) College of Horticulture and a senior author of the study. “By sequencing and analyzing wild and cultivated lychee varieties, we were able to trace the origin and domestication history of lychee. We demonstrated that extremely early- and late-maturing cultivars were derived from independent human domestication events in Yunnan and Hainan, respectively.”

Additionally, “We identified a specific genetic variant, a deleted stretch of genetic material, that can be developed as a simple biological marker for screening of lychee varieties with different flowering times, contributing importantly to future breeding programs,” adds Rui Xia, PhD, professor in the same college at SCAU and another senior author of the research.

“Like a puzzle, we’re piecing together the history of what humans did with lychee,” says Victor Albert, PhD, University at Buffalo evolutionary biologist, also a senior author of the study. “These are the main stories our research tells: The origins of lychee, the idea that there were two separate domestications, and the discovery of a genetic deletion that we think causes different varieties to fruit and flower at different times.”

The study was published in Nature Genetics. It was led by SCAU in collaboration with a large international team from China, the U.S., Singapore, France and Canada.

Senior authors are Rui Xia, Jianguo Li and Houbin Chen from SCAU; Ray Ming from the University of Illinois at Urbana-Champaign; and Victor Albert from UB. First authors are Guibing Hu, Junting Feng, Chengming Liu and Zhenxian Wu from SCAU; Xu Xiang from the Guangdong Academy of Agricultural Sciences; Jiabao Wang from the Chinese Academy of Tropical Agricultural Sciences; and Jarkko Salojärvi from the Nanyang Technological University.

A fruit so beloved, it was domesticated more than once

To conduct the study, scientists produced a high-quality “reference genome” for a popular lychee cultivar called ‘Feizixiao’, and compared its DNA to that of other wild and farmed varieties. (All the cultivars belong to the same species, Litchi chinensis).

The research shows that the lychee tree, Litchi chinensis, was likely domesticated more than once: Wild lychees originated in Yunnan in southwestern China, spread east and south to Hainan Island, and then were domesticated independently in each of these two locations, the analysis suggests.

In Yunnan, people began cultivating very early-flowering varieties, and in Hainan, late-blooming varieties that bear fruit later in the year. Eventually, interbreeding between cultivars from these two regions led to hybrids, including varieties, like ‘Feizixiao’, that remain extremely popular today.

The exact timing of these events is uncertain. For instance, the study suggests that one milestone, the evolutionary split between L. chinensis populations in Yunnan and Hainan, which took place before domestication, could have occurred around 18,000 years ago. But that is only an estimate; other solutions are possible. Still, the analysis provides a fascinating look at the evolutionary history of lychees and their link with humans.

When will this lychee tree flower? A simple genetic test could tell

The study not only adds new chapters to the history of the lychee; it also provides an in-depth look at flowering time, a hugely important trait in agriculture.

“Early-maturing lychees versus late-maturing lychees came from different places and were domesticated independently,” says Albert, PhD, Empire Innovation Professor of Biological Sciences in the UB College of Arts and Sciences. “This, by itself, is an interesting story, but we also wanted to know what causes these differences: Why do these varieties fruit and flower at different times?”

By comparing the DNA of many lychee varieties, the team identified a genetic variant that could be used to create a simple test for identifying early- and late-blooming lychee plants.

The variant is a deletion — a chunk of missing DNA — that lies near two genes associated with flowering, and may help to control the activity of one or both of them.

Yunnan cultivars that bloom very early have the deletion, inheriting it from both parents. Hainan varieties that mature late do not have it at all. And Feizixiao — a hybrid with nearly equal amounts of DNA from each of the two regional populations — is “heterozygous” for the deletion, meaning that it has only one copy inherited from one parent. This makes sense, as Feizixiao flowers early, but not extremely early.

“This is very useful for breeders. Because the lychee is perishable, flowering times have been important to extending the season for which the lychee is available in markets,” Albert says.

Sequencing the lychee genome is only the start

The team at SCAU initiated the lychee genome study as part of a bigger project that hopes to greatly expand what we know about the DNA of important flowering plants within the same family, Sapindaceae.

“Sapindaceae is a large family that includes many economically important plants,” Xia says. “So far, only a few of them, including lychee, longan, rambutan, yellowhorn and maple, have had their full genomes sequenced.”

“We, the College of Horticulture at SCAU, are working on a large collaborative project of sequencing more Sapindaceae species native to China and of economic importance, such as rambutan, sapindus (soapberries) and balloon vine, aiming at broad and thorough comparative genomics investigations for Sapindaceae genomics,” Xia adds. “The main research interests will be flowering, secondary metabolism leading to flavors and fragrances, flower and fruit development, among others.”