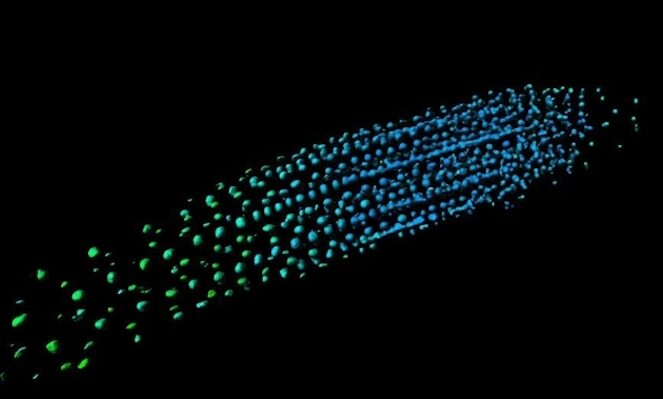 The research team that developed a biosensor that first recorded that a distinct gradient of the plant growth hormone gibberellin correlated with plant cell size has now revealed how this distribution pattern is created in roots.

Starting when a plant embryo forms within a seed and continuing throughout the plant lifecycle, undifferentiated stem cells undergo radical transformations into specialised root, stem, leaf and reproductive organ cells. This transformation relies on a suite of molecules called phytohormones that, much like human hormones, can move between cells and tissues and trigger distinct biological processes across the bodyplan. While it was not known at the time, mutations involving the gibberellin class of phytohormones were behind the development of many of the high-yielding semi-dwarf wheat and rice varieties that helped drive the Green Revolution in the 1950s and 60s.

The mutations resulted in shorter stems, enabling the crop plants to redirect energy into growing grain rather than stems and leaves and also prevented lodging caused when tall spindly plants fall over before harvest. We now know through advances in molecular and genetic tools that gibberellins (GA) regulate growth and development throughout the plant lifecycle – from germinating seeds, elongating stems and roots, to the formation of flowers. It is therefore not surprising that GA continues to attract the interest of plant scientists investigating how hormones control plant growth and as a possible target for future crop improvements.

A collaboration between the research teams of Alexander Jones, Sainsbury Laboratory at the University of Cambridge, and Leah Band and Markus Owen at the University of Nottingham, explain the biochemical steps responsible for a distinctive GA distribution seen in plant growth in PNAS. Their research provides a valuable model for understanding GA patterns in other plant tissues and its related influence on plant development.

“GA is known to regulate cell multiplication and cell expansion to increase the growth root rate , but we as yet don’t have a full picture of how. We had previously observed there was a distinct longitudinal gradient of GA from root tip to root elongation zone that correlated with cell size in growing roots of the model plant Arabidopsis thaliana. We also observed an exogenous-GA-generated gradient with faster accumulation of GA in larger cells, but we did not know how these patterns were being created.”

To help find the answer, the researchers combined mathematical models with experimental observations to take a deep dive into the cells to see what biochemical and/or transport activities might be responsible.

Mathematicians from the University of Nottingham, Dr Leah Band and Professor Markus Owen, developed a computational model to simulate the hormone GA dynamics in the plant root, which enabled them to test how different processes contribute to the GA gradient. They compared the output of their computer simulations to the experimental observations from the GA biosensor developed by the Jones research group.

“Having considered various scenarios, we found that the model predictions could only agree with the GA biosensor data provided the elongation-zone cells have high GA synthesis and increased permeability” added Dr Band.

In addition to local synthesis of GA, the ability of GA to move between cells is also considered an important factor. The team looked at the permeability of cell membranes to GA and found differences in cell permeability were contributing to the creation of the exogenous-GA-generated-gradient.