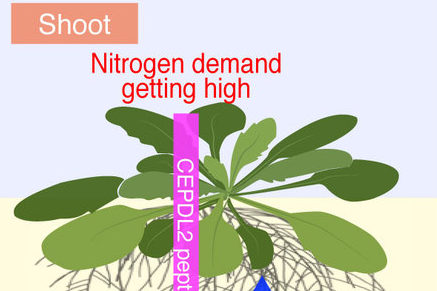 Nagoya University researchers have found that in response to the nitrogen demand of leaves, plants produce a hormone that travels from the leaves to the roots to stimulate the uptake of nitrogen from the soil. This hormone is produced in the leaves when they run short of nitrogen, and acts as a signal that regulates the demand and supply of nitrogen between the plant’s shoot and the root. The findings have recently been published online in the journal Nature Communications.

Nitrogen is an essential nutrient for plant growth and is very important for crop production. However, often too much nitrogen fertilizer is used, leading to contamination of the environment and rising food prices. What if plants could be made to regulate their own intake of nitrogen more effectively?

Nagoya University researchers have found the key to doing this. “By enhancing the pathway of this hormone, plants could be able to absorb nitrogen nutrients more efficiently, which may eventually minimize the use of fertilizers,” says Professor Yoshikatsu Matsubayashi of the Graduate School of Science at Nagoya University.

The research team studied how plant roots sense nitrogen demand in the shoots. A previous study using a plant called Arabidopsis (better known as thale cress) had shown that certain hormones, named C-terminally encoded peptide (CEP) and CEP downstream (CEPD), respectively, modulate communications between the nitrogen-starved roots and other roots via leaves. The previous study had also revealed that plants produce other hormones that are structurally similar to CEPD.

In the new study, Prof. Matsubayashi and colleagues also focused on these hormones in Arabidopsis, analyzing each of their functions and thereby identifying a peptide that can strongly promote the absorption of nitrogen. The peptide, named CEP downstream-like 2 (CEPDL2), was present in leaf veins and would be produced rapidly in large amounts when the leaf ran short of nitrogen. Simultaneously, the CEPDL2 peptide would flow from shoot to roots.

In contrast, the researchers demonstrated that on plants where the CEPDL2 peptide had been destroyed, leaves were still small in the later growth period when the shoot requires a lot of nitrogen. “This means the plant cannot grow properly without this peptide, showing that the CEPDL2 peptide is the signal that regulates the balance of demand and supply between leaves and roots,” Prof. Matsubayashi says. “Our findings highlight one extraordinary way in which plants sense and adapt to changing conditions.”