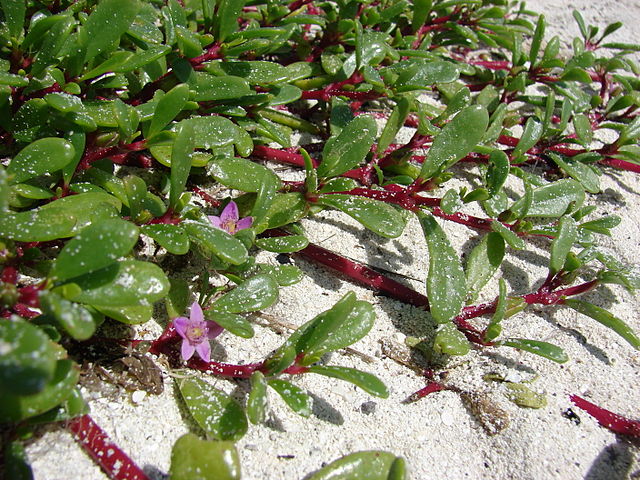 A herb that grows abundantly in coastal areas can be used to rid the soil around nuclear plants of caesium, a radioactive by-product of reactors, says a new study.

Sea purslane or Sesuvium portulacastrum is a salt-tolerant, perennial flowering succulent that grows in sandy coastlines around the world. The study, published October in Advances in Agriculture,described it as a “hyper-accumulator” of caesium and capable of improving soils contaminated by the metal.

“Sesuvium plants rapidly uptake toxic compounds and translocate them to aerial parts such as leaves and stem. That is why we selected the plant for this study,” says T. D. Nikam, an author of the study and professor, Department of Botany, Savitribai Phule Pune University, Pune, India.

The presence of radiocaesium and other metal toxicants in soil, water and air can cause serious consequences to human health and the environment, says the study, and one way to deal with it is to use plants for “phytoremediation” of soils.

“S. portulacastrum has been extensively studied for its applicability in phytoremediation of heavy metals such as cadmium, arsenic, lead, nickel and copper,” Nikam tells SciDev.Net.

The study acknowledges that further studies are required to understand the precise molecular mechanism of caesium tolerance that may depend on the presence of microbes associated with the plant.

The finding that sesuvium is capable of hyper-accumulation of caesium is highly significant says S.S. Syamchand, researcher in chemistry and associate professor at the University College, Thiruvananthapuram.

Syamchand, who was not a participant in the study, said caesium had 40 isotopes (members of an element’s family having the same number of protons but different numbers of neutrons in the atomic structure). “The caesium-137 isotope presents the worst radiation hazards as it can cause infertility and cancer,” he said.

“Phytoremediation is widely accepted for eliminating contaminants in the environment because it is eco-friendly and cost-effective, says  K.C. Jisha, assistant professor of plant science at the MES Asmabi College, Kodungallur, Kerala. “The outcome of the present research should encourage authorities to cultivate S. portulacastrum around all nuclear installations and in contaminated soils,” says Jisha who was not a participant in the study.

According to a recent note by the Food and Agriculture Organization of the United Nations, S. portulacastrum is already being used in some areas for the phytoremediation of saline soils and wastewater and for the protection of coasts from erosion.

Read the paper: Advances in Agriculture