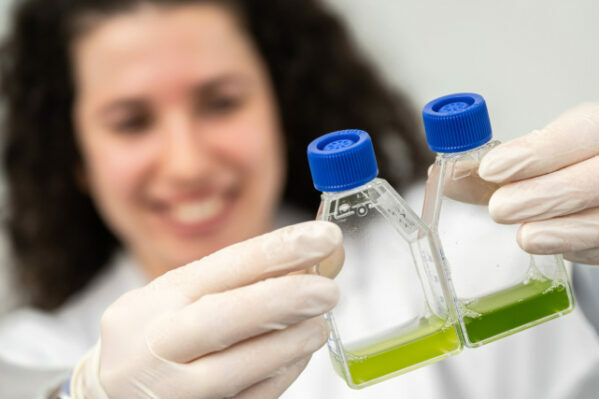 Life on Earth runs in 24-hour cycles. From tiny bacteria to human beings, organisms adapt to alterations of day and night. External factors, such as changes in light and temperature, are needed to entrain the clock. Many metabolic processes are controlled by the endogenous clock. Scientists at the University of Jena have now studied the molecular rhythms of the endogenous clock in the “green lineage”. In a current publication in the journal “Plant Physiology”, the team led by Prof. Maria Mittag of the Matthias Schleiden Institute provides an overview of their genetic basis.

The “green lineage” encompasses green algae, mosses, ferns, gymnosperms and flowering plants. These organisms produce a significant part of the oxygen on Earth and are therefore essential to all other living creatures. Photosynthesis by these green organisms – the conversion of CO2 and water into glucose and oxygen – depends on light, so that good timing of these processes is crucial. Plants prepare for the daylight period even before sunrise and can thus use the light phase most efficiently to achieve optimum yields of photosynthesis and other metabolic pathways. As a result, they grow better and survive competitors. “The fitness of photosynthetic organisms depends on the integrity of their endogenous clocks,” says Maria Mittag. The professor of general botany and her team have therefore investigated how the endogenous clock has developed during the evolution of organisms in the green lineage. To this end, the researchers studied the clock genes of various model organisms from the green lineage, starting with single-celled organisms such as the green alga Chlamydomonas reinhardtii, through the liverwort Marchantia polymorpha, to higher plants, such as thale cress, Arabidopsis thaliana.

Cryptochromes are “conserved” in evolution

The researchers found that there are some genes involved in circadian rhythms that occur in all studied organisms of the green lineage, while other clock genes differ significantly. Among the genes of the endogenous clock that have been “conserved” throughout evolution are cryptochromes. These are receptor molecules with which land plants sense blue light. “Cryptochromes are important for the entrainment and regulation of the circadian clock; they play this role not only in land plants and algae, but also in fungi, insects and mammals,” says Dr Jan Petersen, member of the research team and first author of the current review paper. So far, Maria Mittag’s team has studied cryptochromes in the model organism Chlamydomonas reinhardtii. Its genome even encodes four different cryptochromes. While two of these cryptochromes are involved in the circadian clock, the function of the other two was still unknown.

To analyse the role of one of these cryptochromes with unknown function in detail, the Jena research team compared wild type algal cells with mutants in which the gene for this receptor molecule was knocked out. “We were able to determine that the mutant algae grow significantly more slowly than wild type algal cells,” says doctoral student Anxhela Rredhi.

“However, we were surprised that the mutant algae were greener than the wild type algae,” says Anxhela Rredhi. More colour in the form of green pigments should actually result in better photosynthesis and thus increased growth, as these molecules capture the light for photosynthesis. Finally, the researchers found an explanation. Using electron microscopy, they could see that the cell membranes in which photosynthesis takes place are more densely packed without the cryptochrome than in wild type cells. “On the one hand, this makes the algae appear darker green,” explains Dr Petersen. “On the other hand, it causes the cells to shade each other more, so there is simply less light reaching the inner membranes, which has a negative effect on algal growth.”

It is currently unclear how exactly the recently studied cryptochrome influences these cell structures. The research team will now investigate whether it also plays a role in the circadian clock.