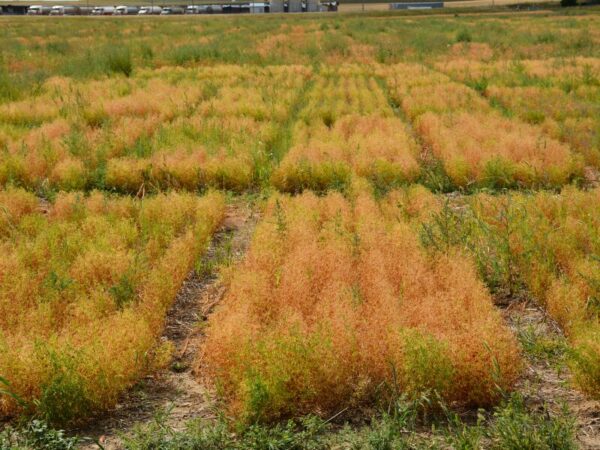 Finding the best lentil varieties for every farm

Lentils are an important and popular food in many parts of the world. They are also a nutritional powerhouse. This versatile legume is a great source of protein, carbohydrates, and fiber, and high in mineral nutrients and vitamins like iron, zinc, magnesium, potassium, and vitamin B.

However, not all lentils are created equal. Lentil genetics can affect both the quality and yield of lentil crops. Environmental factors – like rainfall and soil conditions – can also impact lentil crops. Even the same lentil variety can have vastly different yields and nutritional profiles when grown in different environments.

In a new study, researchers evaluated how genetic and environmental factors together affect lentil crops grown in different parts of Montana. The study was published in Crop Science, a publication of the Crop Science Society of America.

“Understanding how the environment and genetics affect lentil crops is key,” says Chengci Chen, lead author of the study. “It allows growers to select lentil varieties that can adapt to different environments and produce high yielding and high-quality crops.”

Chen is a researcher at the Eastern Agricultural Research Center at Montana State University. The study was conducted at five test sites spread across Montana. The locations had different soil and weather conditions, and the researchers evaluated four varieties of lentils at each study site. Although the study was conducted in Montana, the results have worldwide implications, says Chen.

More than 60% of global lentil exports originated in the northern Great Plains in the United States and Canada. “Our findings are significant for food and nutrition security across the world,” says Chen.

Chen and colleagues showed that environmental factors had large effects on lentil yield and starch content. In contrast, lentil genetics had more influence on protein concentration and some of the macro- and micro-nutrients, such as phosphorus, potassium, magnesium, iron, zinc, and sulfur. Results indicate that lentil nutrition can be biofortified by combining breeding efforts and judicious selection of varieties and farming locations.

But developing lentil varieties adapted to diverse environments to produce stable yield is also important. “That’s because environmental conditions can vary not only in different locations, but also from year to year in the same location,” says Chen.

Lentils are an important economic crop in the United States and across the world. U.S. lentil exports reached $179 million in 2020, according to the USDA. Within the U.S., lentil farming is especially prevalent in the Pacific Northwest inland area and the northern Great Plains, including eastern Washington, Idaho, North Dakota, and Montana.

Lentils can also play a vital role in battling malnutrition. Our bodies need various minerals to be healthy and to thrive. These minerals include zinc, iron, and selenium, among others. Lentils are rich in several of these minerals. “Mineral malnutrition is a major global health concern,” says Chen. “Enhancing the mineral content, especially micronutrients, of lentils would benefit to human health in many parts of the world.”

Chen and colleagues discovered the degree of influence from genetics and the environment on lentil yield, protein and starch levels, and mineral contents and links between them. “These findings can allow breeders and growers to breed and select lentil varieties that have inherited high protein and mineral content,” says Chen.

The study also showed that lentil protein and starch concentrations are negatively correlated. In other words, lentil varieties with high starch content tended to have relatively low protein levels, and vice-versa.

The funding support for this study was provided by USA Dry Pea and Lentil Council and Montana Agricultural Experiment Station.

Image: Lentil cultivar evaluation plots in the Eastern Agricultural Research Center at Montana State University in Sidney, Montana. The study was conducted at five test sites spread across the state. The locations had different soil and weather conditions, and the researchers evaluated four varieties of lentils at each study site. Credit: Chengci Chen