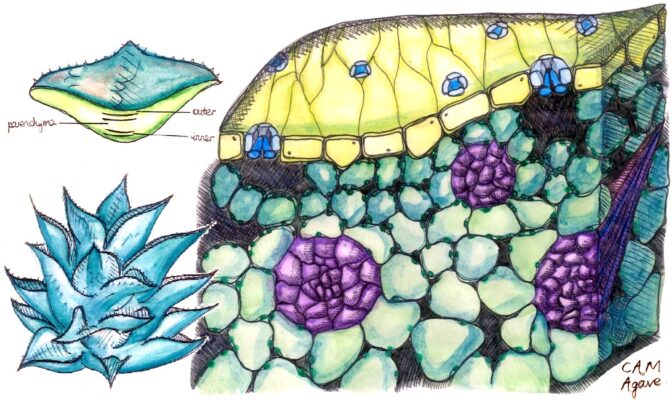 ASPB is pleased to announce the publication of noteworthy research investigating water-saving alternatives for photosynthesis in temperate environments, which are likely to become hotter and drier in the future.

Drought causes major crop losses in many regions of the world, and climate change threatens to exacerbate the occurrence of drought in temperate as well as arid regions. In new work published in The Plant Cell, Dr. Nadine Töpfer from the Leibniz Institute of Plant Genetics and Crop Plant Research, along with colleagues from the University of Oxford in the U.K., analyzed the potential for engineering drought-resistant plants via introduction of Crassulacean acid metabolism (CAM). They used a sophisticated mathematical modelling approach to study the effects of introducing CAM photosynthesis, which is used by plants that are able to thrive in arid conditions, into C3 plants, which tend to thrive only in areas where sunlight intensity and temperatures are moderate and water is plentiful.

Most plants, including some major crops such as rice, wheat, oats, and barley, use C3 carbon fixation, in which CO2 taken up during the day through stomatal pores in the leaf is used immediately in light-driven photosynthesis reactions. Unfortunately, this leads to significant water loss through these pores in hot, dry conditions. CAM is an alternative carbon fixation pathway that temporally separates CO2 uptake from carbon fixation, allowing the plant to open stomata for CO2 uptake in the cool of the night and store the carbon internally. The CAM plant then closes its stomata during the heat of the day to minimize water loss, and releases the stored CO2 inside the leaf cells to be used for light-driven photosynthesis during the day.

Using simulations across a range of temperature and relative humidity conditions, the authors asked: Would full CAM or alternative water-saving methods be more productive in settings where C3 crops typically are grown? They found both that vacuolar storage capacity in a leaf is a major factor that limits water-use efficiency during CAM and that the environmental conditions shapes the occurrence of different phases of the CAM cycle. Mathematical modeling also identified an alternative CAM cycle that involves mitochondrial isocitrate dehydrogenase as a potential contributor to initial carbon fixation at night.

Lead author Nadine Töpfer, who did the work during the tenure of a Marie-Curie Postdoctoral Fellowship in Professor Lee Sweetlove’s group in Oxford, said: “Modelling is a powerful tool for exploring complex systems and it provides insights that can guide lab and field-based work. I believe that our results will provide encouragement and ideas for the researchers who aim to transfer the water-conserving trait of CAM plants into other species.”

Their results revealed not only that the water-saving potential of CAM photosynthesis strongly depends on the environment, with the daytime environment more important than that at night, but also that alternative metabolic modes, distinct from those of the naturally occurring CAM cycle, may be beneficial under certain conditions such as during shorter days with less extreme temperatures. This timely work provides valuable insights that will help us prepare for the challenges of growing food crops in increasingly hot and dry temperate environments.