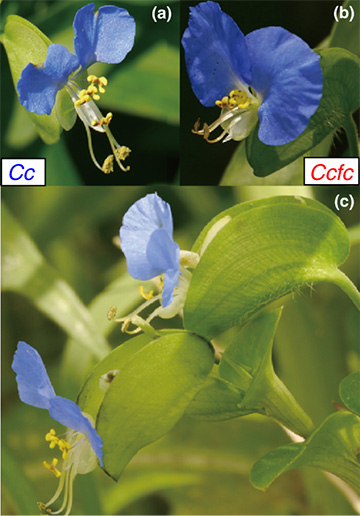 Close relatives can coexist: two flower species show us how

Scientists have discovered how two closely-related species of Asiatic dayflower can coexist in the wild despite their competitive relationship. Through a combination of field surveys and artificial pollination experiments, the new study shows that while reproductive interference exists between the two species, Commelina communis and Commelina communis forma ciliata, both can counter the negative effects of this interference through self-fertilization.

These findings offer a different perspective on theories surrounding co-existence, and suggest a new significance for plants’ ability to self-fertilize. The finding was made by Japan Society for the Promotion of Science Research Fellow Koki Katsuhara and Professor Atushi Ushimaru, both part of the Kobe University Graduate School of Human Development and Environment, and it was published in Functional Ecology.

The ability of plant species to coexist has long fascinated scientists. When species with shared pollinators flower at the same time in the same place, it’s thought that the reproductive interference caused by pollinators makes it hard for these plant species to coexist. Reproductive interference occurs when pollen from another species is deposited on the pistil (female reproductive part of the flower), and competition between pollen tubes causes a decrease in seed production.

The two species of Asiatic dayflower Commelina communis (Cc) and Commelina communis forma ciliata (Ccfc), commonly found in the fields and roadsides of Japan, produce very similar-looking flowers and attract the same pollinators. First the scientists looked at the two species in the wild. They found that pollinators such as bees and hoverflies visited both species indiscriminately, and both species showed a decrease in seed production as the other species’ number of flowers increased. In other words, mutual reproductive interference was occurring. The surveys also suggested that Cc is less affected by this interference than Ccfc. This is consistent with the dominance of Cc in the areas surveyed.

We would expect Cc to wipe out Ccfc through reproductive interference, but in fact both species can be found growing in the wild. Katsuhara and Ushimaru propose that the distribution of these two species plays an important role in their ability to coexist despite the strong competition between them. While most areas are dominated by Cc, in some areas Ccfc outnumbers Cc, giving it the advantage. Even when it is almost totally surrounded by Cc, Ccfc can still leave some seeds through self-pollination.

Scientists believe that self-pollination developed so that plants can still produce seeds even when pollinators are scarce. This study suggests that the self-pollination can also mitigate the negative effects when pollen from other species hinders seed production. Self-pollination could also be used to explain the coexistence of plants who share pollinators. This finding marks a step forward in shedding light on species coexistence, and gives a new perspective to the evolutionary background of self-pollination.