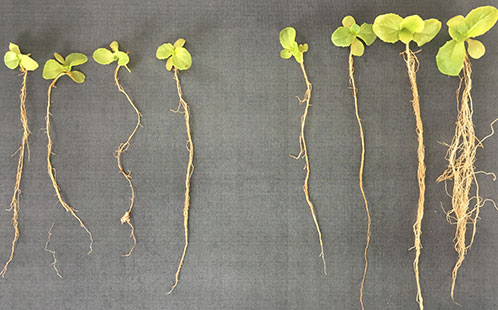 New research published in Nature Scientific Reports has found that a hormone produced by plants under stress can be applied to crops to alleviate the damage caused by salty soils. The team of researchers from Western Sydney University and the University of Queensland identified a naturally-occurring chemical in plants that reduces the symptoms of salt stress in plants when applied to soil, enabling the test plants to increase their growth by up to 32 times compared with untreated plants.

Salinity is a huge issue across the world, affecting more than 220 million hectares of the world’s irrigated farming and food-producing land. Salinity occurs when salty irrigation water is repeatedly applied to crops, leading to progressively increasing levels of salt in the soil which reduces crop yields, increases susceptibility to drought and damages soil microbiology. Scientists have long tried to find ways to breed salt-tolerance or develop methods that remove salt, and this new research is promising in its potential ability to reduce the damage in crop plants that results from salt.

“We identified a compound called ACC that occurs naturally in plants when they become stressed by drought, heat or salty conditions,” said Dr Hongwei Liu, Postdoctoral Fellow in Soil Biology and Genomics at the Hawkesbury Institute for the Environment at Western Sydney University.

By applying ACC to crops planted into salty soils, it created conditions that prevented the formation of the compounds that cause plant damage under salty conditions and increased beneficial soil enzyme and microbial activity. These effects enabled the plants to cope with the salt and increased the growth of lettuce plants by nearly five times and model plants by over 30 times.

“There is very significant potential for this compound in enabling us to manage crop production in otherwise-unusable soils,” said Professor Peer Schenk School of Agriculture and Food sciences at the University of Queensland.

“Growers have traditionally used a range of long-term and slow-acting materials such as gypsum, manures, tillage and other methods to reduce the exposure of plants to the salts in soils but these are costly, frequently ineffective and work to limited benefits over years or decades”, he said.

One of the major benefits of ACC is that it is naturally produced by plant roots and therefore contributes to long-term soil health, plant-microbe relationships and carbon storage.