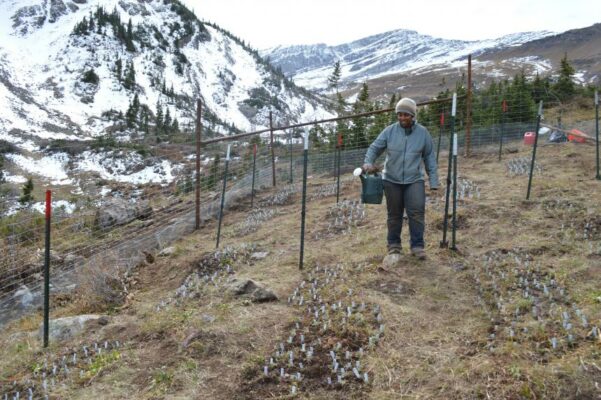 A new study from the University of Georgia sheds light on how plants respond to stressful environmental conditions presented by climate change. In a paper published in Proceedings of the Royal Society B, researchers showed that plants grown in drier conditions simulating the effects of climate change exhibited higher costs of reproduction than those grown under current conditions. The findings offer clues about how plant populations might respond to climate change and could provide guidance for developing conservation strategies.

The term “costs of reproduction” refers to the idea that living organisms that invest their energy in current reproduction have less available to invest in future needs, such as survival, growth and reproduction. In low stress environments, where resources are plentiful, these costs may be negligible or difficult to detect. Under limited resources and more stressful conditions, however, these costs are often intensified, with pronounced negative effects on future survival and reproduction.

Postdoctoral researchers Elena Hamann and Susana Wadgymar—now an assistant professor of biology at Davidson College—and Associate Professor Jill Anderson of the Odum School of Ecology and the department of genetics, studied how drier conditions that accompany climate change alter costs of reproduction for Boechera stricta, a montane flowering plant in the mustard family.

“The idea was to investigate whether climate change, which usually imposes more stressful conditions, can change these costs of reproduction and how that may affect the evolution of populations along elevation,” said Hamann, the paper’s lead author.

The study took place over the course of six years in the Rocky Mountains. The researchers set up experimental gardens at five different elevations within the plant’s natural range. High elevation sites are cooler, with later snow melts, shorter growing seasons and increased soil moisture relative to low elevation sites.

To simulate climate change, the researchers experimentally manipulated snow in the gardens. Each year they applied an early snow removal treatment in half of the plots to mimic reduced winter snowpack, early spring snowmelt and lower water availability during the growing season. In the control gardens they left the snowpack intact. They monitored survival, flowering success and fecundity—or number of seeds produced—of the plants.

At the lowest elevation sites, which are naturally warmer and drier, they found pronounced costs of reproduction under both the control and early snow removal treatments: plants that reproduced well in the first year had shorter lifespans and were less likely to reproduce again in the future. Additionally, early snow removal at mid-elevations caused this same effect, relative to control conditions. According to Hamann, these results indicate that costs of reproduction will likely increase as climate change proceeds.

Surprisingly, at higher elevations, the pattern was reversed: plants in snow removal plots had lower costs of reproduction relative to those in control plots. The researchers hypothesized that instead of increasing drought stress, as snow removal does at lower elevations, the early snow removal extended the otherwise short growing season at the highest elevations, making conditions more favorable for the plants.

Hamann said that taken together, the findings supported their hypothesis that climate change has an impact on the costs of reproduction for the plants.

“It basically shows that climate change is affecting and shifting these costs of reproduction and that selection is likely to act on it,” she said.

Hamann believes that in this case, selection—the process by which organisms with certain characteristics are more likely to survive and reproduce—may favor Boechera stricta individuals with shorter lifespans under climate change conditions, though further research is needed to make a conclusion.

“In the future, it would be interesting to compare the lifespans of past and present Boechera stricta to see if climate change has already acted on these traits,” she said.

Hamann and Anderson are now testing how snow removal alters patterns of natural selection and are experimentally warming the temperatures in some of their gardens to study this effect more specifically. Hamann suggested that future research could focus on disentangling the effects of water availability versus temperature to better understand the impacts of climate change.

Anderson and Hamann hope that this study will enable researchers to identify plant populations that are particularly vulnerable to climate change and plan appropriate management practices to conserve biodiversity in a rapidly changing climate.

This research was made possible through funding from the National Science Foundation.

Read the paper: Proceedings of the Royal Society B