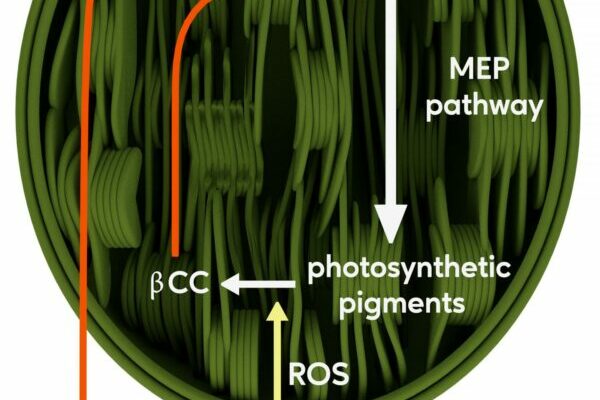 Beta-cyclocitral produced by plants after herbivore attack increases defense responses while inhibiting the production of metabolites for growth.

In a new study in PNAS, an international team of researchers including scientists from the Max Planck Institute for Chemical Ecology has shown that Arabidopsis thaliana plants produce beta-cyclocitral when attacked by herbivores and that this volatile signal inhibits the methylerythritol 4-phosphate (MEP) pathway. The MEP pathway is instrumental in plant growth processes, such as the production of pigments for photosynthesis. In addition to down-regulating the MEP pathway, beta-cyclocitral also increases plant defenses against herbivores. Since the MEP pathway is only found in plants and microorganisms, but not animals, knowledge of a signal molecule like beta-cyclocitral opens up new possibilities for the development of herbicides or antimicrobial agents that block this pathway.

Trade-offs between defense and growth processes in plants

Researchers have long known that plants have limited resources that they can invest in defense against enemies or in growth and reproduction, depending on their environmental conditions. Many studies have already shown that plants increase their defenses when attacked by insects producing, for example, toxins or inhibitors of digestive enzymes that harm their attackers. However, much less is known about how herbivore attack affects growth processes in the plant. “We wanted to investigate how herbivory might affect photosynthesis and the methylerythritol 4-phosphate (MEP) pathway, a pathway making metabolites for growth that is directly supplied from photosynthesis,” says first author Sirsha Mitra, who had started working on this project at the Max Planck Institute and is now an assistant professor at Savitribai Phule Pune University in Pune, India.

The MEP pathway has been a research topic at the Max Planck Institute for Chemical Ecology in Jena for several years “The MEP pathway makes the building blocks for plant isoprenoids or terpenoids, a very large family of plant metabolites involved in growth, defense and signaling,” says Jonathan Gershenzon, the head of the Department of Biochemistry and one of the authors.

The international research team, which also included partners from the Universitat Ramon Llull in Barcelona, Spain, the Technical University in Lyngby, Denmark, and the University of Toronto, Canada, demonstrated that plants of the thale cress Arabidopsis thaliana which were fed to caterpillars of the African cotton leafworm, a generalist feeder that attacks many different plant species, increased defenses while simultaneously reducing growth processes. Using a variety of techniques from molecular biology and analytical chemistry, as well as caterpillar bioassays, the scientists were able to show that a specific volatile compound, beta-cyclocitral, formed by cleavage of beta-carotene due to a reactive form of oxygen, was responsible for this shift of resources. While beta-cyclocitral acts as a chemical signal to increase defenses, it simultaneously decreases the formation of compounds in the MEP pathway by directly inhibiting the rate-controlling enzyme of this pathway.

“Of particular importance to our study was the exposure of plants to isotopically labeled carbon dioxide (13CO2) instead of the dominant atmospheric carbon dioxide (12CO2). Carbon dioxide is easily introduced into the MEP pathway via photosynthesis. This allowed us to track how the metabolic flux in the MEP pathway changed when plants switched to a defensive mode after herbivore attack and beta-cyclocitral slowed down the MEP pathway,” says Louwrance Wright, one of the lead authors who is now working in South Africa. Caterpillars feeding on plants treated with beta-cyclocitral exhibited decreased growth in comparison to caterpillars feeding on untreated plants. This is further evidence of the importance of this volatile signal for plant defense.

Potential benefits in agriculture and medicine

When plants are attacked, they may have to stop growth processes in order to release sufficient resources for their defense. Beta-cyclocitral signaling is a mechanism that precisely controls this shift in resources. Beta-cyclocitral, or a more stable derivative, could therefore be applied to crops to stimulate defenses during a pest outbreak. “Since the MEP pathway is found in all plants and many microorganisms, but not in animals, it is of particular interest for the development of herbicides, as well as drugs with antimicrobial activity,” says Jonathan Gershenzon, explaining the potential applications of this research. Further studies in India will now investigate whether beta-cyclocitral can increase insect resistance in crops, such as tomatoes, and whether it interacts with other already known defense signals.

Image: Feeding by herbivores not only causes plants to produce defense compounds, but also leads to a slowdown in growth processes. Cleavage of beta-carotene (a photosynthetic pigment) via reactive forms of oxygen (ROS = reactive oxygen species), forms beta-cyclocitral (βCC), which directly inhibits the rate-controlling enzyme of the MEP pathway. Credit: Kimberly Falk, Moves Like Nature