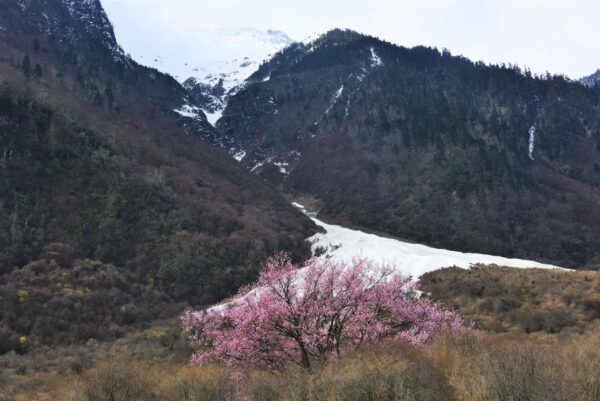 A BTI-led team has identified genes enabling peaches and their wild relatives to tolerate stressful conditions – findings that could help the domesticated peach adapt to climate change.

The study, co-led by Boyce Thompson Institute faculty member Zhangjun Fei, examined the genomes of peach’s wild relatives and landraces – varieties that have adapted over a long time to specific local conditions – from seven regions in China. They identified genes responsible for peach’s tolerance to multiple environmental factors, including cold, drought and ultraviolet (UV-B) radiation levels at high altitudes.

“Our study provides many candidate genes, showing how peach has adapted to all kinds of environmental stresses and stimuli,” said Fei, who is also an adjunct professor in Cornell University’s School of Integrative Plant Science. “Breeders can use this information to develop more resilient domesticated peach trees that cope better with temperature extremes, drought and other harsh, changing conditions imposed by climate change.”

Over the past decades, climate change has made many food crops less productive, highlighting an urgent need to make them more resistant to climate stressors. Many studies have identified the genes that enable rice, soybean and other food crops to adapt to their local environments. But few studies have looked at major fruit crops like the domesticated peach (Prunus persica), which has an annual global yield of 24.5 million tons.

Many of domesticated peach’s adaptation genes have been lost as humans bred the plant to focus on flavor, sweetness and other traits. However, peach’s wild relatives and landraces harbor great genetic diversity that could provide resources for improving the resilience of their domesticated cousin.

The researchers gathered 263 peach wild relatives and landraces – 218 from the National Peach Germplasm Repository of China and 45 from the Tibetan Plateau. The team then conducted genome-wide environmental association studies on the samples, and identified more than 2,700 spots in the genome that are linked to 51 environmental factors affecting the local climates of those regions.

For example, peaches from a region with extremely low winter temperatures had a genetic variation in the histidine phosphotransfer protein AHP5, suggesting the variant gave the peach tree the ability to resist cold. The team confirmed this idea by showing levels of the protein increased when the plants were subjected to low temperatures.

Plants from a very arid region harbored variants in multiple genes in the abscisic acid (ABA) biosynthesis pathway that regulates drought stress responses, and in 12 genes on pathways that regulate starch and sugar metabolism. Further experimentation showed that in response to drought stress, ABA induced higher levels of a sucrose-producing enzyme, thereby explaining why fruit from the peach trees in this region have consistently higher sugar contents than fruit from less arid regions.

“When a fruiting plant like peach is growing under a stressful condition like drought, its fruit gets sweeter,” Fei said. “In this study, we have found the direct genetic link between drought and the sugar content of peach.”

In the peach trees from the Tibetan Plateau, the team identified a variant in chalcone synthase 2 associated with tolerance to the intense UV-B radiation of that high-altitude region. The variant increased the production of the purple-colored flavonoid anthocyanin in the plant’s new shoots, protecting them from UV-B radiation damage.

Climate change has also affected many temperate flowering and fruiting species, including peach, by causing them to bloom earlier. The team analyzed 89 peach samples spanning three decades (1983-2011) from one region in China, and found that bloom dates had advanced by about 10 days over that period. They also identified a potential genetic explanation for this advance: a variation in a circadian clock gene, LNK1, which is up-regulated by warm temperatures and highly expressed during blooming.

“This finding could eventually let breeders control the bloom date of their trees, so that the peach crop is ready for harvest when the grower and the market are ready,” Fei said.

Image credit: A behmi tree (Prunus mira), which is a wild relative of the domesticated peach, grows in its native habitat next to a glacier on the Tibetan Plateau. Credit: Yong Li, Zhengzhou Fruit Research Institute, Chinese Academy of Agricultural Sciences.