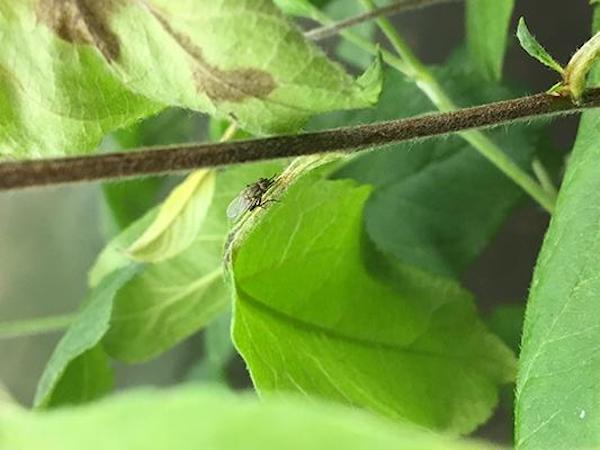 Historically credited as being the first bacterium ever characterized as a plant pathogen, fire blight is a bacterial disease that leads to significant losses of pear and apple. The role of insects in the spread of this disease has been long studied. In a new study, plant pathologists based at Cornell University and Cornell AgriTech take a hypothesis that has been more or less ignored for 100 years and provided support for its validity.

According to first author Matthew Boucher, the study describes a long hypothesized but never experimentally supported transmission mechanism for fire blight. Boucher and colleagues show that flies in an apple orchard can acquire the bacterial agent (Erwinia amylovora) of fire blight from sugary droplets exuding from diseased apple trees and subsequently transmit the bacterium to uninfected shoots so long as those shoots are damaged in some way.

“This transmission mechanism is mechanical, the bacterium does not appear to have a close evolutionary relationship with any given insect and may seem inefficient to an unsuspecting observer,” explained Boucher. “However, we show that the massive populations of E. amylovora in the sugary droplets exuding from trees allow flies to acquire enough bacteria for the population to persist in and on flies for as long as seven days in some cases.”

Flies can continually shed bacteria over the course of those seven days, resulting in multiple opportunities for a single insect to initiate an infection.

“Demonstrating that bacterial populations can survive within the insect is important because previous research largely discounted E. amylovora survivability within an insect.” More research is needed, especially under field conditions, but this is an exciting step toward understanding the diversity of interactions between plants, insects, and phytopathogens.

“We also show that insects do not need to have intimated, co-evolved relationships with plant pathogens to be important agents in the disease cycle. There are only one or two similar pathogens in documented research, but there are likely more out there that need to be studied to advance our knowledge of this end of the disease-vector spectrum,” Boucher said when asked what makes his work groundbreaking. “As a collective work, we show the importance of integrating historical literature into modern research and revisiting topics and hypothesis that may not have been technologically feasible to investigate when they were first proposed.”