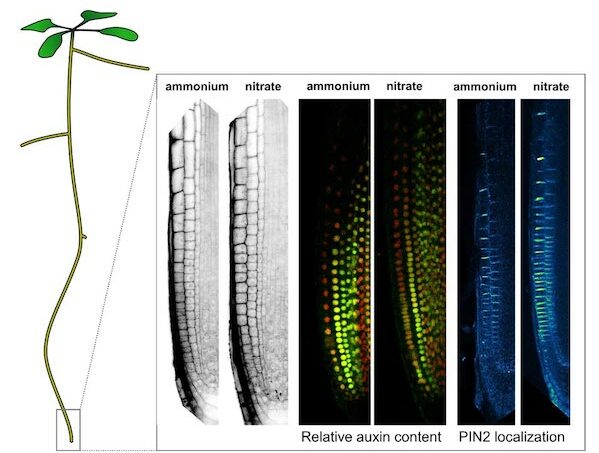 A plant’s way to its favorite food

A plant’s way to its favorite food

Scientists discover how plants adapt their root growth to changes of nutrients.

Nitrogen is one the most essential nutrients for plants. Its availability in the soil plays a major role in plant growth and development, thereby affecting agricultural productivity. Scientists at the IST Austria were now able to show, how plants adjust their root growth to varying sources of nitrogen. In a new study published in The EMBO Journal they give insights in the molecular pathways of roots adaptation.

Like any other plant, Arabidopsis thaliana or mouse-ear cress, needs nitrogen to survive and thrive. But, like maize, beans and sugar beet, it prefers nitrogen in the form of nitrate, growing better on nitraterich soil. Whereas, pine and rice for example preferentially grow on ammonium nutrition, another form of the key macronutrient nitrogen. If the concentration or the availability of the different forms of nitrogen fluctuate, plants have to adapt quickly. “One of the most important questions is, what is the role of plant hormones in adaptation to the nitrogen availability? How do the machineries within a plant cope with their changing environment?” asks Eva Benková, developmental biologist and Professor at the Institute of Science and Technology (IST) Austria.

In search of answers, Krisztina Ötvös, postdoctoral fellow in the research team of Eva Benková, together with colleagues from the Universidad Politécnica de Madrid, the Pontifical Catholic University of Chile, the Austrian Institute of Technology and the University of Montpellier, looked at two extremes: They compared how Arabidopsis seedlings that were grown exclusively on ammonium reacted, once the scientists transferred them to media containing either ammonium or nitrate.

If a plant lives in suboptimal soil, it tries to maintain its root growth as long as possible to reach a more suitable form of nitrogen. The major processes, which maintain the root growth, are the cell proliferation in the meristem, a plant tissue consisting of undifferentiated cells, and the cell expansion. The plant has to find a good balance between these two. Provided with ammonium, the form of nitrogen Arabidopsis is not so fond of, the meristematic zone of the cress produced less cells. Instead, they very quickly elongated. “Once we moved the plants to the nitrate, suddenly the meristem became bigger, more cells were produced and there was a different kinetics in cell expansion,” says Benková. “Now Arabidopsis could afford to put more energy into cell division and optimized its root growth differently.”

Whether the plant invests in cell proliferation or cell elongation is instructed by the level of auxin. This plant hormone is essential for all developmental processes. It is transported in a very controlled way from one cell to the next by special auxin transporters. The proteins that control the transport of auxin out of the cells, so called efflux carriers, regulate the flow of auxin depending on which side of the cell they are sitting. Benková and her team were especially interested in the auxin transporter PIN2, which mediates the flow of auxin at the very root tip. The researchers were able to identify PIN2 as the main factor to set up the balance between cell division and cell elongation. “We observed that once we moved plants onto the nitrate, the localization of PIN2 changes. Thereby, it changes the distribution of auxin.”

“The present study is the result of the input of many different people from cell biologists and computer scientists to people working in advanced microscopy. It really is a multidisciplinary approach,” Eva Benková emphasizes. In order to take a close look at the processes within Arabidopsis’ roots, for example, the biologists used a vertical confocal microscope – a tool especially adapted at the IST Austria to suit the researchers’ needs. Instead of a horizontal stage the microscope uses a vertical one, which allows you to observe the plant growth the way it naturally does – along the gravity factor. With its high resolution Benková and her team were able to observe how the cells within Arabidopsis’ roots were dividing and expanding in real time. In a previous project, researchers at the IST Austria won Nikon’s Small World in Motion video competition, showing live-tracking of a growing root tip of Arabidopsis thaliana under the microscope.