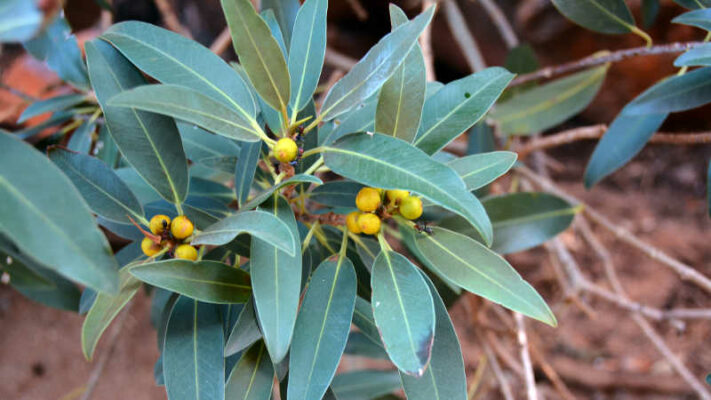 A new species of fig discovered

Figs are one of the world’s most recognisable trees and extensively used by First Nations peoples, but until recently a single widespread species, Ficus brachypoda, was the only kind recognised in central Australia.

“Careful study of collections held in herbaria across Australia, and with reference to historical specimens held in European herbaria, showed that the central Australian populations were indeed morphologically distinct from more northern or western populations,” Dr Barrett says.

“These figs are an incredibly significant species to First Nations peoples in central Australia, for food, shelter, and spirituality. Damaging these trees could be punishable by death historically, such is their significance to the whole community.

“While the species is quite widespread, and not currently threatened, it is only found in small populations, so shifts in climate, or localised impacts such as hot fires, could impact the species in the near future.”

The culturally significant plant also grows on other elevated landscapes in central Australia, including Kata Tjuta (The Olgas) and Karlu Karlu (Devils Marbles).

“No indigenous name spans all language groups, so choosing any one of the existing names could effectively exclude others from the same degree of significance. Based on these considerations, we were respectfully asked to choose a ‘standard’ scientific name for the species.

“We then chose to call the species Ficus desertorum, as the most commonly used English name for this species is the ‘desert fig’. The name also highlights how unusual it is to find a fig in the desert.”

Honours student Brendan Wilde, who has been studying Australian native figs for a decade, first saw the species and enlisted Dr Barrett, an expert in plants of Northern Australia, to help find out more.

The importance of figs

The main differentiating factor for this species is its leaves, being smoother, narrower and thicker than related Australian fig species.

The trees are used as shelter for the western bowerbird and a wide variety of native snails that gain valuable shade in an otherwise arid environment.

“Figs are famous for their long roots which seek out water, and this species has perfected that art,” Dr Barrett says.

“Roots have been reported following cracks in cliff walls for over 40 metres to reach precious water which might be hiding deep within the rock, or far below in a secluded pool. This is how the desert fig persists in the arid conditions found in the heart of Australia.”

The novel scientific name for this species was formally described in the journal of the National Herbarium of New South Wales, Telopea, an open access publication.

The herbarium, which is being relocated to a new facility at the Australian Botanic Garden Mount Annan next year, is part of the Australian Institute of Botanical Science, the country’s premier botanical research organisation.

You can also hear more about the work these scientists do by listening to the Branch Out podcast.