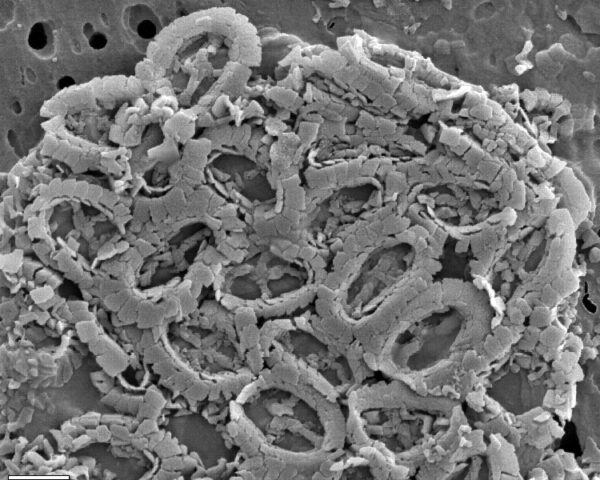 More than 66 million years ago, an asteroid impact led to the extinction of almost three-quarters of life on Earth. The little life that was left had to struggle, and research into its tenacity can provide key insights into how organisms survive environmental challenges. In a new study, scientists at Bigelow Laboratory for Ocean Sciences discovered how some species of single-celled algae lived through the mass extinction, a finding that could change how we understand global ocean processes.

Coccolithophores, like most algae, are photosynthetic and utilize the sun’s energy to make food. However, the aftermath of the asteroid impact was thought to have blanketed the planet with several months of darkness, a death sentence for most of the world’s photosynthetic organisms. In combination with other fallout effects, this caused the extinction of more than 90 percent of all coccolithophore species, some of the most influential organisms in the ocean. However, others endured.

As part of the new study, the team conducted laboratory experiments that showed some coccolithophores could survive without light. This revealed that the organisms must have another way to produce the energy and carbon that they need.

“We’ve been stuck on a paradigm that algae are just photosynthetic organisms, and for a long time their capability to otherwise feed was disregarded,” said Jelena Godrijan, the paper’s first author, who conducted the research as a postdoctoral scientist at Bigelow Laboratory. “Getting the coccolithophores to grow and survive in the dark is amazing to me, especially if you think about how they managed to survive when animals like the dinosaurs didn’t.”

The study revealed how some coccolithophore species could use previously unrecognized organic compounds as carbon sources instead of carbon dioxide, which is what plants usually use. They can process dissolved organic compounds and immediately utilize them in a process called osmotrophy. The findings may explain how these organisms survive in dark conditions, such as after the asteroid impact, or deep in the ocean beneath where sunlight can reach.

The research was published in the journal New Phytologist and co-authored by two other researchers at Bigelow Laboratory, Senior Research Scientist William Balch and Senior Research Associate David Drapeau. It has far-reaching implications for life in the ocean.

Coccolithophores are integral to processes that control the global ocean and atmosphere, including the carbon cycle. They take in dissolved carbon dioxide from the atmosphere, which gets transported to the ocean floor when they die.

“That’s hugely important to the distribution of carbon dioxide on Earth,” said Balch. “If we didn’t have this biological carbon pump, the carbon dioxide in our atmosphere would be way higher than it is now, probably over two times as much.”

Coccolithophores also play an important role in mitigating ocean acidity, which can negatively affect organisms like shellfish and corals. The single-celled algae remove carbon from the water to build protective mineral plates made of limestone around themselves, which sink when they die. The process effectively pumps alkalinity deeper into the ocean, which chemically bolsters the water’s ability to resist becoming more acidic.

The new study revealed that the algae also take in carbon from previously unrecognized sources deeper in the water column. This could connect coccolithophores to a new set of global processes and raises fundamental questions about their role in the ocean.

“Coccolithophores are integrated into global cycles in ways that we never imagined,” Balch said. “This research really changes my thinking about food webs in dark regions where photosynthesis clearly isn’t happening. It changes the paradigm.”

The researchers next want to perform ocean experiments to observe how coccolithophores take in nutrients in their natural environment, especially in the dark. Godrijan hopes her work will help reveal more about the organisms, their significance, and their complex role on our planet.

“Coccolithophores are tiny, tiny creatures, but they have such huge impacts on all life that most people are not even aware of,” Godrijan said. “It brings me hope for our own lives to see how such small things can have such an influence on the planet.”