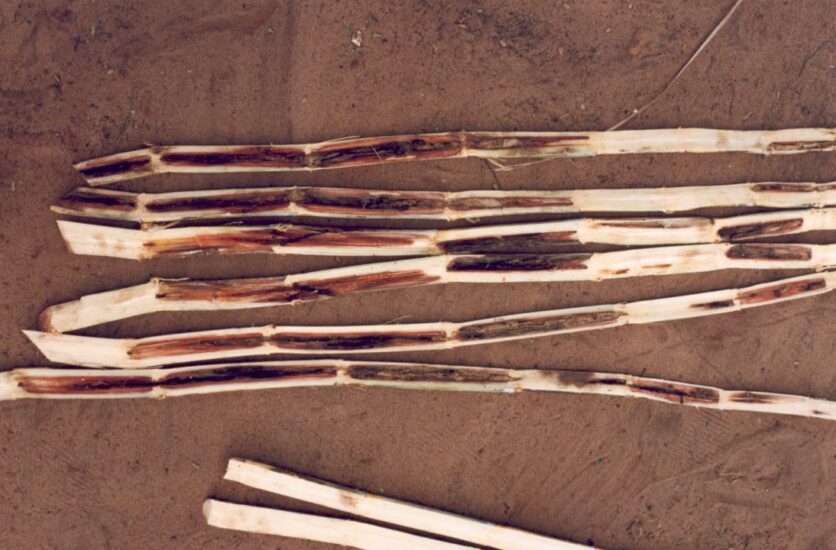 Researchers at the University of São Paulo discover that the fungus Fusarium verticillioides uses volatile compounds to manipulate insects and plants, promoting its own dissemination.

The fungus Fusarium verticillioides is one of the causes of red rot, the most serious sugarcane disease. Losses average around USD 1 billion per harvest in Brazil alone.

The traditional approach to the etiology of this disease is that it is triggered by Diatraea saccharalis, a moth usually referred to as the sugarcane borer. In the caterpillar stage, this insect bores into the stem of the plant, which is later infected opportunistically by the fungus.

However, a study conducted in Brazil by the University of São Paulo‘s Luiz de Queiroz College of Agriculture (ESALQ-USP) has turned this model upside down, showing that the trigger is not the insect but the fungus. “It’s the first scientifically demonstrated case of a pathogenic fungus manipulating both its vector [the insect] and host [the plant] for its own benefit,” José Maurício Simões Bento, a professor at ESALQ-USP and one of the principal investigators for the study, told.

An opportunistic fungus does not depend on vectors but infects the host by entering it through a lesion in its structure. This case is different. F. verticillioides changes the characteristics of the vector and host to promote its dissemination. “We establish a new paradigm for the association plant-insect-fungus in sugarcane plantations,” Bento said.

The group’s findings are reported in an article entitled “Fungal phytopathogen modulates plant and insect responses to promote its dissemination”, set to publish in ISME Journal, the official Journal of the International Society for Microbial Ecology, owned by Springer Nature.

“Previously the moth was the target and the idea was that the fungus merely took advantage of holes made in the stem by its caterpillars. We discovered this is not the case. The fungus manipulates the insect in order to penetrate the plant and manipulates the plant to attract more insects,” said Márcio de Castro Silva Filho, also a professor at ESALQ-USP and co-principal investigator for the study.

Through several experiments, the researchers discovered that sugarcane plants infected by F. verticillioides produce volatile compounds that are irresistible to pregnant females of the moth Diatraea saccharalis. Attracted by these compounds, the moths lay their eggs in the plants. When the caterpillars hatch, they penetrate the stems and are themselves attracted by the volatile compounds, which they ingest. When they enter the pupal stage and develop into adult moths, they are already carriers of the fungus.

“These infected young moths transmit the fungus to the next generation via their eggs,” Silva Filho said. “Unlike healthy moths, they’re attracted by the volatile compounds in healthy uninfected plants, which they infect by laying eggs in them. The fungus thereby manipulates both the plant and the insect to promote its dissemination.”

Instrumentalized by the volatile compounds, females that do not carry the fungus prefer to lay their eggs in infected plants, while infected females prefer healthy plants. Red rot spreads to more and more cane plantations via this insidious mechanism.

Red rot destroys between 50% and 70% of the sucrose content of infected sugarcane stems. “Our study revolutionizes the science of this disease, considered the most serious threat to sugarcane and responsible for huge losses to ethanol and sugar producers,” Silva Filho said. “We show that the caterpillar is the vector, in contrast with the view that the fungus enters the plant via the holes made by the caterpillar.”

Image: Researchers at the University of São Paulo discover that the fungus uses volatile compounds to manipulate insects and plants, promoting its own dissemination. Credit: Heraldo Negri de Oliveira