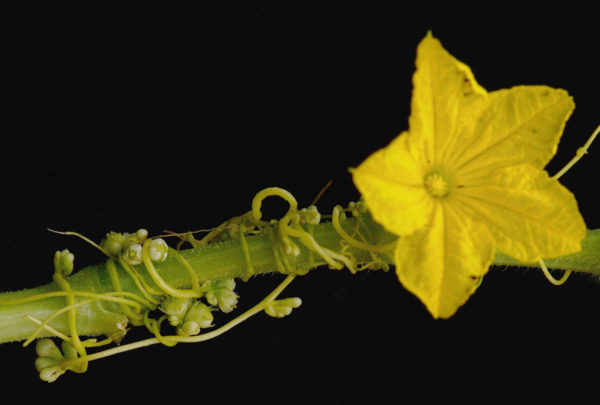 About 4,000-5,000 parasitic plant species exist. Among these, dodders (Cuscuta, Convolvulaceae) are distributed worldwide. Compared with normal autotrophic plants, they have a unique morphology – they are rootless and leafless and carry out no or very little photosynthesis.

Flowering is critical to reproduction in higher plants. Leaves sense environmental factors, such as day length (photoperiod), and initiate flowering programs when the environment and internal physiology are appropriate.

However, sequencing of dodder genomes has indicated that dodders have lost many genes that are critically important for controlling flowering in autotrophic plants. Thus, dodders are likely to have an exceptional flowering mechanism.

The FT gene is very well conserved and it encodes a very important signaling protein that activates flowering. However, analysis of the FT gene in C. australis suggests that the dodder FT gene seems to be a pseudogene (i.e., it is nonfunctional).

Using biochemical tools, the team further demonstrated that when the host expresses FT signals, the flowering-inducer FT can travel into C. australis and activate the flowering program of C. australis.

“The dodder does not flower autonomously; instead, when the host plant produces the FT signal protein to activate flowering, the host-produced FT protein is transported into the dodder, thereby activating dodder flowering,” said WU.

This study reveals that by eavesdropping on host FT flowering signals, the dodder can synchronize its flowering with its hosts.

This study sheds important light on the physiology, ecology, and evolution of dodders and may provide new strategies for biocontrol of parasitic weeds in agriculture and forestry.