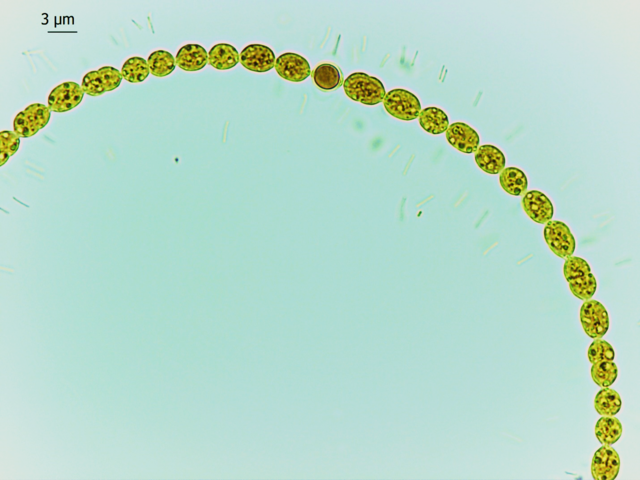 In order to feed a projected 9 billion people by 2050, farmers need to grow 50% more food on a limited amount of arable land. As a result, plant scientists are in a race against time to engineer crops with higher yields by improving photosynthesis.

Blue-green algae (cyanobacteria) are known to photosynthesize more efficiently than most crops, so researchers are working to put elements from cyanobacteria into crop plants.

A new study describes a significant step towards achieving that goal.

When plants photosynthesize they convert carbon dioxide, water and light into oxygen and sucrose, a sugar used for energy and for building new tissues. During this process, Rubisco, an enzyme found in all plants, takes inorganic carbon from the air and “fixes” or converts it to an organic form the plant uses to build tissues.

One hurdle in improving photosynthesis in crops is that Rubisco reacts with both carbon dioxide and oxygen in the air; the latter reaction creates toxic byproducts, slows photosynthesis and thereby lowers yields. But in cyanobacteria, the Rubisco is contained within microcompartments called carboxysomes that shield the Rubisco from oxygen.

The carboxysome additionally allows the cyanobacteria to concentrate carbon dioxide so Rubisco can use it for faster carbon fixation, Hanson said. “Crop plants don’t have carboxysomes, so the idea is to eventually put in the entire carbon-concentrating mechanism from cyanobacteria into crop plants,” she added.

To engineer this system to work in crop plants, scientists must remove carbonic anhydrase, a naturally occurring enzyme, from the chloroplasts, organelles in plant cells where photosynthesis occurs. That’s because anhydrase’s role is to create an equilibrium between CO2 and bicarbonate in plant cells, by catalyzing reactions in which CO2 and water form bicarbonate and vice versa. But in order for the carbon-concentrating mechanism from cyanobacteria to work in crops, bicarbonate in the system must reach levels many times higher than those found at equilibrium.

“So in this study,” Hanson said, “we did that step [of removing anhydrase] that’s going to be needed to make the carboxysome work.”

In the paper, the authors describe using CRISPR/Cas9 gene-editing technology to disable genes that express two carbonic anhydrase enzymes that are present in chloroplasts. In the past, another research group had used a different method to remove 99% of the anhydrase enzyme’s activity, and the plants grew normally. But when Hanson and colleagues removed 100% of the enzyme’s activity, the plants barely grew. “It showed that plants need this enzyme to make bicarbonate that is used in pathways to make components of leaf tissue,” Hanson said.

When they put the plants into a high CO2 growth chamber, they resumed normal growth, as the high amounts of CO2 resulted in a spontaneous reaction to form bicarbonate.

The team believes they have a workaround to remove anhydrase and still have enough bicarbonate. In future research, recently funded by a three-year, close to $800,000 National Science Foundation grant, they plan to put a bicarbonate transporter on the chloroplast membrane, in order to import bicarbonate from other parts of the cell into chloroplasts. As well as making anhydrase unnecessary, the extra bicarbonate is expected to improve photosynthesis even before carboxysomes can be engineered into chloroplasts.

Experiments showed that the absence of carbonic anhydrase did not interfere with photosynthesis, contrary to previously held views.

“We now know we can make an inactive enzyme that won’t affect our carbon concentrating mechanism but will still allow the crop plants to be resistant to viruses,” Hanson said.

The study was funded by the Synthetic Biology Program of the National Science Foundation.