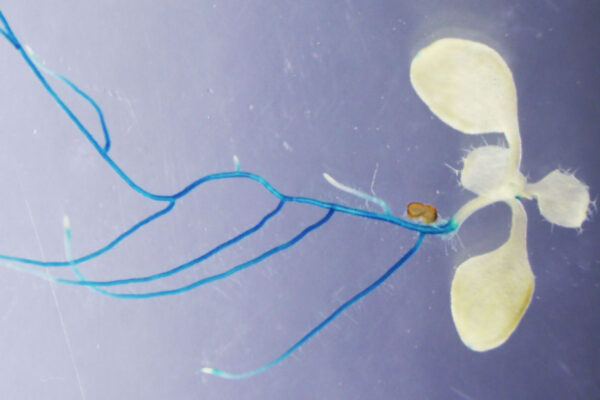 Nitrates are critical for the growth of plants, so plants have evolved sophisticated mechanisms to ensure sufficient nitrate uptake from their environments. In a new study published in the journal Nature Plants, researchers at Nagoya University, Japan, have identified a plant enzyme that is key to activating a nitrate uptake mechanism in response to nitrogen starvation. This finding explains how plants meet their needs in challenging environments, opening doors to improving agriculture in such environments.

This synthesis of a nonfunctioning protein that can later be activated intrigued Dr. Yoshikatsu Matsubayashi of Nagoya University, but he sees a certain logic in this preparatory protein synthesis; he notes, “Proteins cannot be synthesized when the nitrogen deficiency occurs.” In other words, plants need to synthesize the proteins in a high-affinity transport system before a nitrogen deficiency necessitates the use of those proteins, because nitrogen deficiency itself makes it difficult to synthesize new proteins. In order to better understand this remarkable system, Dr. Matsubayashi and his colleagues set out to identify the protein that activates NRT2.1 in response to nitrogen starvation.

Previous studies had shown that a peptide called CEP found in plant roots plays an important role in activating biochemical pathways that respond to nitrogen starvation, so the researchers focused their investigation on the CEP and its downstream CEPD pathway. Their experiments soon drew their attention to a protein called At4g32950. The researchers found that this protein responds to nitrogen starvation by activating the NRT2.1 protein. It achieves this activation by removing a phosphate group from a specific location on the NRT2.1 protein, so the investigators decided to give the At4g32950 protein a new name: CEPD-induced phosphatase, or “CEPH” for short.

CEPH is found mainly in the cells close to the surface of the Arabidopsis plant’s roots, which is an optimal location for activating a system that evolved for rapid nitrate uptake from the environment. As expected, using laboratory methods to inactivate the gene that encodes CEPH impaired the ability of Arabidopsis plants to use the high-affinity transport system for rapid nitrate uptake, and this meant that the modified plants had lower internal nitrate levels and grew to smaller sizes.

Collectively, these results indicate that CEPH plays a critical role in responding to nitrogen starvation through its activation of the NRT2.1 protein. Dr. Matsubayashi sees considerable potential utility in CEPH as a genetic engineering tool, as he notes, “Artificially enhancing CEPH activity could enable scientists to create plants that grow even in soils with low nutrient levels.” Such findings could change the way agriculture and food security are handled.