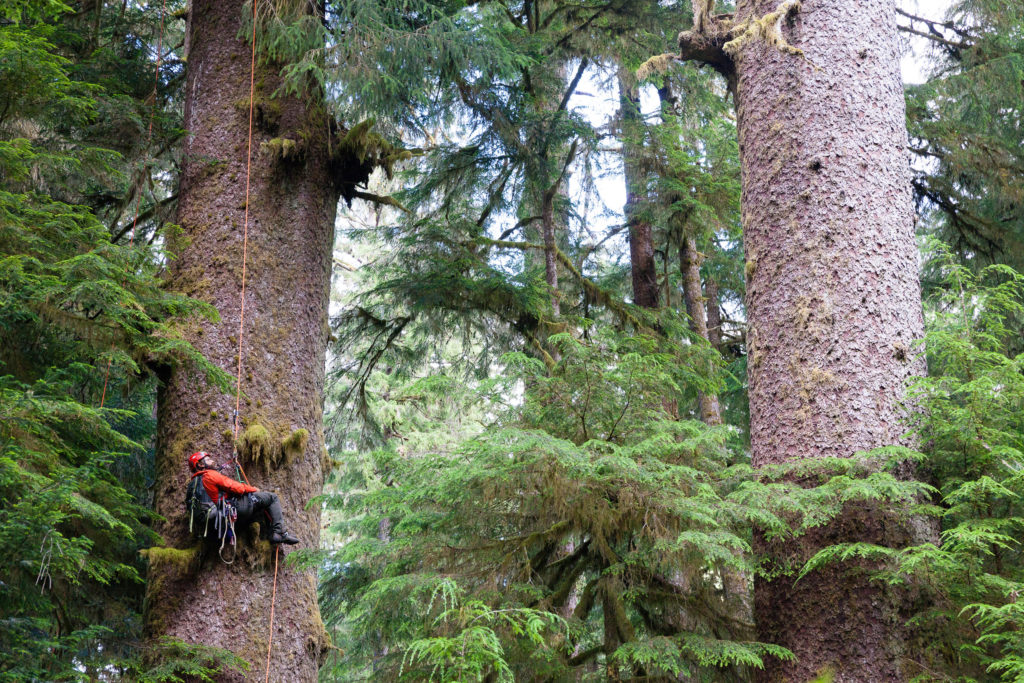 Study provides clues on how trees evolve to survive

In reality, each one is packed to the rafters with evolutionary potential.

UBC researchers scraped bark and collected needles from 20 of these trees last summer, sending the samples to a lab for DNA sequencing. Results, published recently in Evolution Letters, showed that a single old-growth tree could have up to 100,000 genetic differences in DNA sequence between the base of the tree, where the bark was collected, and the tip of the crown.

Each difference represents a somatic mutation, or a mutation that occurs during the natural course of growth rather than during reproduction.

“This is the first evidence of the tremendous genetic variation that can accumulate in some of our tallest trees. Scientists have known for decades about somatic mutations, but very little about how frequently they occur and whether they contribute significantly to genetic variation,” said Sally Aitken, the study’s lead researcher and a professor of forestry at UBC. “Now, thanks to advances in genomic sequencing, we know some of the answers.”

The researchers chose the Sitka spruce because it’s among the tallest trees growing in the Pacific Northwest, and sampled the exceptional trees in Carmanah Walbran Provincial Park.

“Because these trees live so long and grow so tall, they’re capable of accumulating tremendous genetic variation over time,” explained Vincent Hanlon, who did the research as part of his master of science in the faculty of forestry at UBC.

“On average, the trees we sampled for the study were 220 to 500 years old and 76 metres tall. There’s a redwood tree in California that’s 116 metres tall, but these Sitka spruce were pretty big.”

The researchers say more time and further studies will be needed to understand exactly how the different somatic mutations will affect the evolution of the tree as a species.

“Most of the mutations are probably harmless, and some will likely be bad,” explained Aitken. “But other mutations may result in genetic diversity and if they’re passed onto offspring they’ll contribute to evolution and adaptation over time.”

Studying somatic mutation rates in various tree species can shed light on how trees, which can’t evolve as rapidly as other organisms like animals due to their long lifespans, nonetheless survive and thrive, Aitken said.

“We often see tree populations that adapt well to local climates and develop effective responses to changing stresses such as pests and bugs,” she added. “Our study provides insights on one genetic mechanism that might help make this possible.”