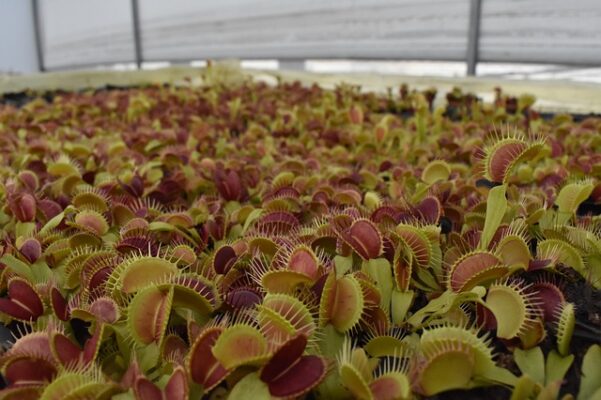 The carnivorous Venus flytrap can be anaesthetised with ether. Some surprising parallels to anaesthesia in humans emerge.

Medicine has a broad repertoire of anaesthetics at its medication allows patients to better endure painful treatments or even sleep through them. As early as 1842, ether was first used for a dental treatment in New York. Since then, this anaesthetic has served as one of the main anaesthetics worldwide for over 100 years.

Remarkably, anaesthetisation is also possible in plants. Claude Bernard proved in 1878 that the touch-sensitive plant Mimosa pudica did not react to touch under the influence of ether by closing its leaves. He concluded that plants and animals must have a common biological essence that is disturbed by anaesthetics.

Ether anaesthetics were used during surgery, childbirth and in palliative treatment to take away patients’ pain. However, the exact mechanism of action has never been elucidated. Even with modern anaesthetics, it is often unclear how and where they function. One reason for this is certainly that humans are a very delicate research subject.

Venus flytrap has a distinctive system for stimulus transmission

This is where plant researchers from Julius-Maximilians-Universität (JMU) Würzburg in Bavaria, Germany, have now stepped in. Professor Rainer Hedrich‘s team has been leading research on the Venus flytrap for over ten years. He has already achieved many groundbreaking insights into the life of this carnivorous plant.

“Unlike most other plants, the Venus flytrap is particularly sensitive to touch. In response to such stimuli, electrical impulses are triggered and transmitted extremely quickly to catch animal prey,” Hedrich explains.

The electrical impulses (action potentials, APs) of the flytrap are comparable to those of our nervous system. It is true that plants do not have a distinct nervous system. But they do transmit electrical information in their conductive tissue, for example to close the trap at lightning speed: “In 2016, we were able to show that the Venus flytrap, like a human, can not only perceive touch, but also count and remember the APs it has fired,” explains the Würzburg professor. “So it made sense to test whether and how ether affects the carnivorous plant’s sense of touch.”

Safety precautions against explosions had to be taken

Before anaesthetising the plant, however, there were some tricky hurdles to overcome in order to be able to use the highly explosive ether gas.

“Explosions resulting in death unfortunately occurred repeatedly in the medical use of ether. That’s why we had an explosion-protected device made so that we could work safely without blowing up the whole institute,” reports Dr. Sönke Scherzer with a grin.

This way, the Würzburg researchers found out that the Venus flytrap can be anaesthetised, similar to a human being, and that it does not react to touch during this time. Investigations of the trap memory even showed that the trap cannot “remember” touches during anaesthesia. Thus, its reaction is not different from that of a patient, as Hedrich‘s team reports in the journal Scientific Reports.

Venus flytrap provides information about the mechanism of action of ether

“Things got really exciting, however, when we discovered that the anaesthetised traps can perceive touch locally, but cannot transmit it,” says Sönke Scherzer, the first author of the paper.

Every touch of the sensory hairs leads to the release of the signal molecule calcium in the Venus flytrap. This molecule also plays a decisive role in the transmission of stimuli in humans.

In the plant, however, the JMU researchers were able to make the calcium signal visible by expressing genetically encoded calcium sensors. They found that the calcium signal is still produced in the sensory hairs of anaesthetised plants after a touch, but that it no longer leaves this touch sensor. Ether therefore interrupts the transmission of stimuli.

“Now we finally knew in which tissue the ether acts,” says Sönke Scherzer. But in order to understand the exact mechanism of action of the anaesthesia, the Würzburg researchers studied these hairs in detail and found out that only the hairs of fully-grown traps trigger the fast calcium signal when touched. Immature traps, on the other hand, do not have this signal and therefore cannot catch any prey.

What distinguishes mature traps from immature ones?

“Now we have looked at how these two developmental stages differ and have come across an interesting gene that is found exclusively in the hairs of adult traps,” says Rainer Hedrich. This gene encodes a glutamate receptor, which is apparently responsible for the rapid transmission of stimuli. These receptors perceive the neurotransmitter glutamate and are also found in humans, where they are involved in the transmission of stimuli in the synapses.

Here, the plant researchers received support from Professor Manfred Heckmann, an expert on animal glutamate receptors at JMU Würzburg. “Indeed, we see calcium signals when we stimulate the traps externally with glutamate,” says Heckmann. “However, this response does not occur in anaesthetised traps or immature traps without the glutamate receptor expressed. Thus, the glutamate receptor appears to be a likely target in ether anaesthesia. When this receptor is blocked, stimulus transmission also stops.

“Now we need to find out what the glutamate receptors of animals and plants have in common and how they differ,” Heckmann outlines ongoing experimental research.

“With this paper, we show that the Venus flytrap can serve as a study object not only for plant research, but also for medicine. With it, it could be possible to investigate the mechanism of action of drugs without having to conduct animal experiments,” Scherzer holds out the prospect.