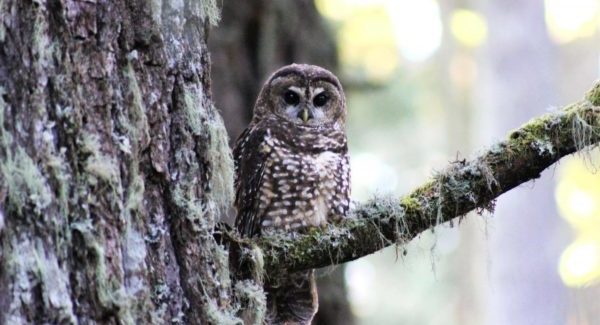 New findings show that old-growth forests, a critical nesting habitat for threatened northern spotted owls, are less likely to experience high-severity fire than young-growth forests during wildfires. This suggests that old-growth forest could be leveraged to provide valuable fire refuges that support forest biodiversity and buffer the extreme effects of climate change on fire regimes in the Pacific Northwest.

A recent study published in the journal Ecosphere examined the impact of the Douglas Complex and Big Windy fires that burned in the Klamath-Siskiyou region of Oregon during July 2013, a drought year. The fires burned through a long-term study area for northern spotted owls. Using information on forest vegetation before and after the fires, along with known spotted owl nesting areas, researchers had an unprecedented chance to compare the impact of wildfire on critical old-growth nesting habitat.

Old-growth forests have more vegetation than younger forests. Researchers expected that this meant more fuel would be available for wildfires, increasing the susceptibility of old-growth forests to severe fire, high tree mortality, and resulting loss of critical spotted owl nesting habitat. However, the data suggested a different effect.

Lesmeister and his colleagues classified fire severity based on the percentage of trees lost in a fire, considering forest that lost less than 20% of its trees to fire subject to low-severity fire and those with more than 90% tree loss subject to high-severity fire. They found that old-growth forest was up to three times more likely to burn at low severity—a level that avoided loss of spotted owl nesting habitat and is generally considered to be part of a healthy forest ecosystem.

“Somewhat to our surprise, we found that, compared to other forest types within the burned area, old-growth forests burned on average much cooler than younger forests, which were more likely to experience high-severity fire. How this actually plays out during a mixed-severity wildfire makes sense when you consider the qualities of old-growth forest that can limit severe wildfire ignitions and burn temperatures, like shading from multilayer canopies, cooler temperatures, moist air and soil as well as larger, hardier trees.”

Because old-growth forests may be refuges of low-severity fire on a landscape that experiences moderate to high-severity fires frequently, they could be integral as biodiversity refuges in an increasingly fire-prone region. Leveraging the potential of old-growth forests to act as refuges may be an effective tool for forest managers as they deal with worsening fire seasons in the Pacific Northwest.

The USDA Forest Service Pacific Northwest Research Station—headquartered in Portland, Ore.—generates and communicates scientific knowledge that helps people make informed choices about natural resources and the environment. The station has 11 laboratories and centers located in Alaska, Washington, and Oregon and about 300 employees.