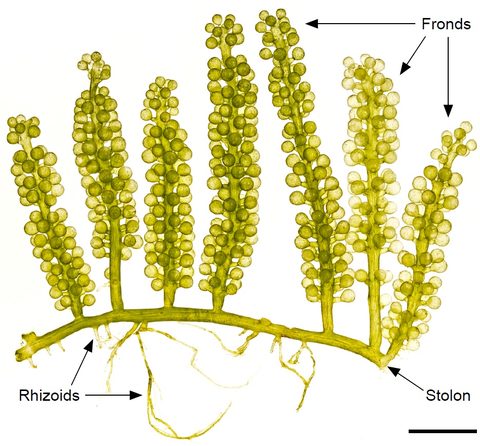 If you’ve ever dined on the tropical island of Okinawa, Japan, your plate may have been graced by a remarkable pile of seaweed, each strand adorned with tiny green bubbles. Known as umi-budo or sea grapes, the salty snack pairs well with rice, sashimi and a tall glass of beer. But umi-budo is more than an iconic side dish; it’s a staple crop for Okinawan farmers. Researchers at the Okinawa Institute of Science and Technology Graduate University (OIST) recently decoded the sea grape genome to learn about the plant’s unique morphology and assist farmers in proper cultivation of the succulent seaweed.

“Many farmers face problems with sea grapes growing poorly. Today, they don’t know why such problems occur,” said Dr. Asuka Arimoto, first author of the study and a postdoctoral scholar in the OIST Marine Genomics Unit, led by Prof. Noriyuki Satoh. “Our genomic data can show them which genes are causing such trouble.” With a catalog of all the genes controlling sea grape growth, said Arimoto, the researchers may be able to help farmers diagnose deficient plants when they crop up. The research could also help curb the spread of closely-related green seaweeds, which harm the environment by pushing out local plant varieties in the Mediterranean Sea and Pan-Pacific.

The study, in DNA Research, utilized sample sea grapes from the Onna Village Fishery Cooperative, whose greenhouses are located just around the corner from OIST campus. The scientists deciphered the full sea grape genome and compared it to 15 published plant genomes, collected from unicellular algae, a type of moss, rice and thale cress. The research revealed key genes that allow sea grapes, a unicellular organism, to don its complex shape, and demonstrated the utility of using the algae to explore evolutionary processes in green plants.

“Recently, other countries have started cultivating this and related species of green seaweed,” said Arimoto. “I think this genomic information could help their future development, as well as Okinawa prefecture.”

Tiny green balls branch off the central stem of the umi-budo plant, and when chewed, these teeny orbs burst in a pop of salty goodness. In Japanese, this sensational texture is known as “puchi puchi,” an onomatopoeia mimicking the sound of puny pops. The Marine Genomics Unit was curious as to how a plant made up of just one cell could grow into such a fantastical shape, thus granting sea grapes their singular texture.

“When we started the project, there were no [decoded] green seaweed genomes,” said Arimoto. “It was completely unknown how many genes are present in green seaweed, and which plant hormones are present to drive development.” The researchers succeeded in deciphering a high-quality genome from an umi-budo plant and compared it to known plant genomes to see whether certain genes appeared in different quantities between them.

The results suggest that the sea grapes contain an expanded set of genes thought to be descended from a core gene set found in a common ancestor of green plants. Among these genes are those that code for nuclear transport regulators—proteins that help control how information moves between the nuclei and the cytosol, the liquid in which a cell’s organelles float. In multicellular organisms, transport regulators tune whole cells to only receive certain signals, like a dial on a radio. In umi-budo, a unicellular organism, the proteins do the same for individual nuclei in the cell.

The mechanism allows single cells to take on complex shapes despite lacking cell membranes to separate one region from the next. Without nuclear transport regulators, sea grapes couldn’t grow in their signature clusters.

Compared to other green algae, sea grapes also have extra genes to code for homeobox proteins, which help to regulate the physical development of plants. Homeobox proteins flip switches on critical genes to turn them “on” or “off,” said Arimoto, which triggers cellular processes and shapes an organism’s anatomical structure down the line.

Helping Sea Grape Farmers in Okinawa and Beyond

In the future, the Marine Genomics Unit hopes to analyze gene expression as it occurs throughout the sea grape life cycle. For instance, evidence suggests that specific homeobox genes are highly expressed in the pollens and eggs of land plants. They may hold similar importance in the early life stages of umi-budo. As sea grape cultivation takes root beyond Okinawa and across the Pacific, this genomic data could help farmers establish more effective growing strategies.

While OIST researchers work with umi-budo in the lab, food-lovers can continue to order the delectable seaweed in restaurants across Japan, likely topped with a light dressing of vinegar, mirin and soy sauce. Oishi!