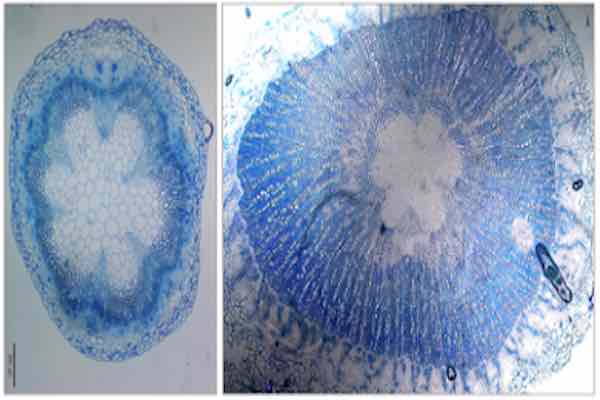 Is it possible to avoid dehydration? Gene promotes wood formation

‘It was a discovery we did not expect,’ says Remko Offringa, professor of Plant developmental genetics. He publishes a new trait of a versatile gene in Current Biology: it makes the difference in plants between herbaceous and woody stem growth. A useful feature to prevent dehydration.

Offringa and his group compared mutants of the plant Arabidopsis to come to this discovery. That sounds more exciting than it is. ‘We made mutant lines in which we overexpressed the AHL15 gene. That means that the function and traits of the gene are emphasized,’ Offringa explains. ‘So by overstimulating the gene more and more, the better you see the effect it has on the plant.’

The professor of the Institute of Biology Leiden (IBL) researching the AHL15 gene for a few years already. Previously, he and former PhD Candidate Omid Karami published an article on the potential of the gene to stimulate Arabidopsis’ growth, which exposed longevity traits. This is possible because the overexpression of the gene enables plant tissues to rejuvenate. In 2020, Karami won the Krijn Rietveld Memorial Innovation Award for this discovery.

A new living strategy for plants

Offringa: ‘Through the rejuvenating process, plants can adopt a new life strategy. Instead of flowering once and dying after producing seeds, they can grow for multiple years and keep growing. However, for the plant it is beneficial to be more resistant to bad weather conditions. And a woody stem could help against dehydration. IBL colleagues Frederic Lens and Salma Balazadeh have found proof of that.’

With this feature, the AHL15 gene could be of great worth for crop cultivation. ‘Climate change makes drought an increasingly significant problem. It could make a difference to still cultivate crops, especially in harsher environments. The gene is already present in all flowering plants, so you should only have to overexpress it,’ Offringa shares.

Collaboratively looking for the underlying mechanism

The professor knew already of the wood-inducing trait during the publication of the longevity traits. However, he consciously delayed writing about wood formation. ‘Because of that, we did not have to write a gigantic analysis of two traits in a scientific article, and gave first author Arezoo Rahimi the possibility to find the underlying mechanism,’ he says. ‘She did that in collaboration with a German and Czech group.’

The basis for wood formation

An explanation for the occurrence of wood formation is the steering asset of the versatile gene. AHL15 directs different other genes, which stimulates the production of cell-division-hormone cytokinin in the stem of the plant. Cityokinen promotes radial growth in the stem: the basis of wood formation. Analyses in the Czech Republic confirmed that cytokinin is present in higher concentrations in the stems of the mutant Arabidopsis plants.

Offringa suspects that the traits he discovered are only the tip of the iceberg. ‘We want to know which genes are directed by AHL15. Because this many traits that are dependent on one gene is quite extraordinary. Together with Lens and Balazadeh, and research groups in Wageningen and Groningen, we want to further investigate the effect of wood formation on drought resistance, and the use of woody stems for isolating biomaterials. For the time being, we are defenitely not finished with ALH15.’