Get a new view: attend an interdisciplinary conference

When I first volunteered to write a blog about the Plant Wax 2015 conference, I thought I’d be writing about its relevance to the Global Plant Council’s stress resilience initiative. After all, the waxy coating (cuticle) that covers the aerial surfaces of plants is particularly important as a barrier against water loss and pathogens, while reflecting excess heat and UV radiation.

As it turns out, one of the most important lessons I learned from the meeting was a reminder of the powerful synergy that can happen when people with radically different goals and approaches get together to share ideas. 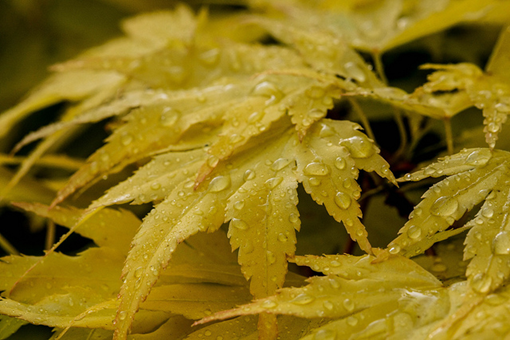 Plants are coated with a hydrophobic waxy covering known as a cuticle. Image credit: Adrian Scottow. Licensed under: CC BY-SA 2.0.

A meeting of two worlds

In the run up to the meeting, held 16–19 June 2015 in beautiful Ascona, Switzerland, I realized that the majority of speakers and delegates were organic geochemists, rather than plant scientists like myself. Other than brief discussions with the academics in the University of Bristol’s School of Chemistry I hadn’t had much interaction with this area of research, so didn’t really know what to expect.

Plant biologists are interested in cuticular waxes because of their impact on the physiology of the plant. The cuticle is composed of many different types of compounds, including alkanes, alcohols, aldehydes, ketones and esters, to say nothing of the more complicated compounds I learnt about at the conference (triterpenoids, anyone?). Each compound gives the wax certain characteristics, making it more suited to a particular environment, or to enhancing a particular function. Many of these changes, however, are yet to be fully understood.

The cuticle is formed of hydrophobic wax compounds on a scaffold of cutin (a polyester polymer), topped with a layer comprising only wax. Image credit: Yeats and Rose, 2013. Plant Physiology.

Organic geochemists, on the other hand, extract plant waxes from soils, sediments and rocks and analyze them as an integrated signal to cleverly reconstruct past climates. They typically investigate n-alkanes, the simplest straight-chain compounds found in waxes, which are least likely to break down over time. Amazingly, they can look at the ratio of deuterium (heavy hydrogen, 2H) to normal hydrogen (1H) in the n-alkanes to work out the plants’ source of water, or the ratio of 13C to 12C to work out whether the majority of plants at that time were using C3 or C4 photosynthesis.

The Plant Wax conference was organized to try and bring these two very different groups together, encouraging communication and crossover between research fields, and specifically, to answer the question: what could we learn from each other? 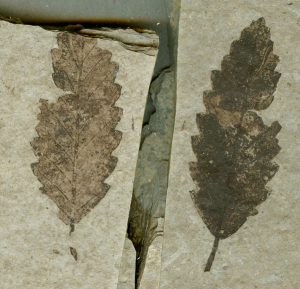 Plant waxes can be preserved in fossils, but organic geochemists typically look at sediments and sedimentary rocks. Image credit: James St. John. Licensed under CC BY 2.0.

At the start of the conference, I don’t think the majority of biologists had much knowledge of the finer details of organic geochemistry. Likewise, many geochemists said they only had a general overview understanding of wax biosynthesis and plant physiology. The two fields have very little crossover in the scientific literature.

Since geologists’ isotope studies are based on generalizations made from modern biological studies in a few plant species, the geologists had several requests for biologists. Firstly, to improve climate reconstructions, they asked for more biological data!

The geochemists asked the biologists whether there was anything they could help us with. It was quite hard for me to imagine how their methods – environmental reconstructions of the past based on biological studies – could help us with modern plant biology.

In fact, I felt a little smug. I’d been feeling decidedly ignorant while hearing about ingenious geochemistry research, so I almost felt vindicated: did they need us more than we needed them?

It wasn’t until the last day of the conference that I realized just how wrong I was.

One of the last talks was by Dr Nikolai Pedentchouk, University of East Anglia, UK. He’s a collaborator of Amelia Frizell-Armitage, my fellow Global Plant Council New Media Fellow, and works on wheat waxes from an organic geochemist’s perspective.

Nikolai described his research into carbon and hydrogen isotopes in the waxy compounds of glaucous (dull blue-ish grey wax) versus non-glaucous (glossy green) wheat: “I used a field set-up to investigate several issues that are of interest to palaeoecologists and palaeoclimatologists and potentially to plant biochemists. We really wanted to know whether differences in leaf wax composition or amount resulted in differences in the isotope values of individual compound classes”.

How could this isotope research be useful to biologists? Amazingly, it could be used to elucidate the biosynthetic pathways for the different compounds in wheat wax – something that has so far not been possible using standard biological techniques.

“When plants synthesize organic compounds they fractionate stable isotopes, for example 13C vs. 12C and 2H vs. 1H. By measuring the isotopic composition of individual compound classes we could potentially reconstruct the order of reactions that could have led to the biosynthesis of a particular compound”, explained Nikolai.

Nikolai’s application of geochemical techniques to solve a biological problem really opened my eyes to the innovations that can be made when people from vastly different research backgrounds work together and share ideas. Whether its using quantum mechanics to improve our understanding of photosynthesis, or chemical and computational modeling to advance synthetic biology, interdisciplinary collaboration is driving plant science research forwards, and I encourage you all to think outside your research box too!