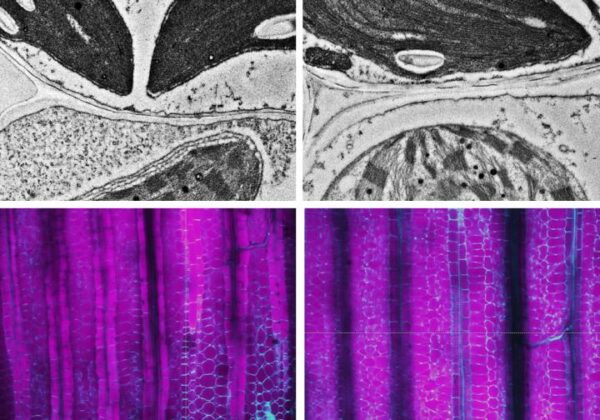 An impressive body of evidence published this week reveals the answer to a mystery that has puzzled plant scientists for more than 30 years: the role of the molecule suberin in the leaves of some of our most productive crops. This discovery could be the key to engineering better crops and ensuring future food security.

Highly productive crops such as sugarcane, sorghum and maize belong to the type of plants that use the more efficient C4 photosynthetic pathway to transform water, sunlight and carbon dioxide (CO2) into sugars.

Scientists have known for a long time that one of key factors that makes C4 photosynthesis more efficient is that they have the capacity to enclose CO2 inside a gas tight compartment in the leaf tissue, making it easier for the inefficient photosynthetic enzyme Rubisco to fix carbon.

“The big question we haven’t been able to answer until now is what makes this compartment gas tight so CO2can’t escape?” says lead author Dr Florence Danila, from the ARC Centre of Excellence for Translational Photosynthesis (CoETP) at the Australian National University (ANU).

“Our research provides several pieces of evidence about the responsibility of suberin on making the leaf cells of C4 plants, gas tight. Suberin forms a layer that keeps CO2 gas inside a layer of cells called the bundle sheath. We have grown mutant plants that don’t develop this layer and we have seen the deleterious effect this mutation has in their growth and in their capacity to photosynthesise,” says Dr Danila, who works at ANU as part of the international C4 Rice Project, led by Oxford University.

This discovery is the result of many years of work, a bit of serendipity and access to modern techniques that were not available until recently, including faster and cheaper genome mapping, high throughput phenotyping, electron microscopy and gas exchange measures.

“We have known for a long time that suberin is in the bundle sheath cells of the C4 plants leaves. However, we didn’t have the experimental evidence to prove its essential role for C4 photosynthesis. Now, for the first time, we have been able to see clearly under the microscope, the anatomical differences between plants with and without suberin. The key element in this discovery is that we found a mutant population of green foxtail millet (Setaria viridis) that didn’t have the gene that produces suberin,” says CoETP’s Deputy Director Professor Susanne von Caemmerer, one of the co-authors of this study.

This elusive mutant population was generated in the International Rice Research Institute (IRRI) by screening hundreds of plants under low CO2 conditions and then selecting those plants that didn’t perform well.

“Using high throughput screening, we identified only three mutants with impaired photosynthetic capacity. We sent the seeds to ANU in Canberra and they grew and analysed them using the electron microscope and gas exchange techniques. To our surprise, one of these mutants was the one that lacked suberin, says Dr Rob Coe, who was in charge of the screening process at IRRI.

Centre Director and co-author of the paper Bob Furbank says that “this is a very exciting discovery, one of the last mechanistic pieces of the C4 photosynthesis puzzle, as Hal Hatch, the discoverer of the C4 pathway noted some time ago”.

“It shows that science discoveries can take a long time to be solved and that the recipe for eureka moments like this are the collaborative work of several experts combined with modern technologies, plus a pinch of serendipity. It seems that all the stars were aligned this time for us, but it was certainly a hard nut to crack,” he says.

Dr Danila says that the team’s next steps involve applying their discovery and new developed methodologies to projects like the C4 rice project that aims to convert rice (a C3 photosynthesis crop) into the more productive C4 path.

“We will also focus on another unsolved mystery: the case of a group of grasses which use C4 photosynthesis but don’t have suberin,” she says.