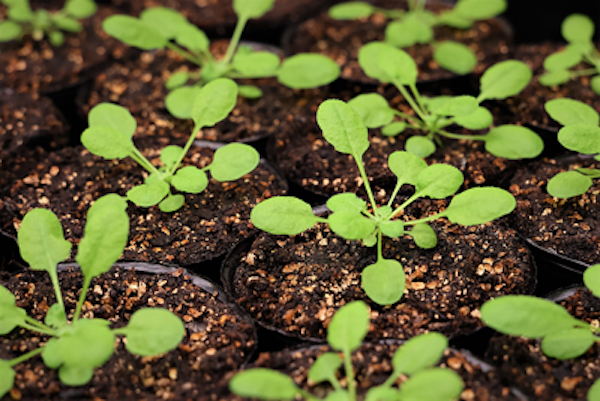 A group of non-steroidal anti-inflammatory drugs (NSAIDs) may prove valuable for investigating the molecular mechanisms inherent in plant immunity, according to plant scientists at RIKEN. Their results may also help improve genome-editing techniques for crops.

Many NSAIDs, including aspirin, are derived from a plant defense signaling hormone called salicylic acid. In plants, salicylic-acid levels increase in response to pathogenic attacks from viruses, fungi and bacteria. External treatment with salicylic acid can also boost the immune responses of plants. However, the precise mechanisms underlying salicylic-acid signaling pathways are unclear, partly because the compound plays multiple roles and acts differently in different plants.

Ken Shirasu at the RIKEN Center for Sustainable Resource Science has spent many years studying plant immunity. Back in 1997, he demonstrated that salicylic acid induces immune signaling. When they encounter a pathogen, plants trigger salicylic-acid activity to induce local cell death as a key immunity response.

“Chemical genetics has come a long way since then, and so I decided to return to my initial experiment with my team here at RIKEN,” says Shirasu. “We re-established the assay using a cell-culture system of the model plant Arabidopsis.”

Since Shirasu’s team knew that salicylic acid interacts with a protein called NPR1, a critical regulator of immunity-related genes, they used the gene that encodes NPR1 as a marker of salicylic-acid activation in their model. The researchers explored whether other NSAIDs could boost plant immunity when challenged with the bacterium that causes bacterial speck disease. The cell-culture system allowed them to rapidly screen thousands of chemicals to find salicylic-acid functional mimics that caused immune-mediated cell death.

“Most of the chemicals we tested initiated immune responses similar to those of salicylic acid, but we found three ‘oxicam-type’ NSAIDs that instead suppressed immunity signaling,” says Shirasu. “This was very curious.”

When the team examined the activity of the most potent of the three, tenoxicam, they found that tenoxicam prevents the NPR1 protein from accumulating in cell nuclei.

“These NSAIDs provide a unique tool to dissect the salicylic-acid signaling pathway and improve our understanding of plant immunity,” Shirasu adds.

A potential application of this finding could be in genome editing. Agrobacterium is often used to genetically transform plants, but some crops are resistant to infection. Oxicam-type NSAIDs may provide a way of switching off immunity so that transformation can work.

Image: An Arabidopsis plant model provided RIKEN researchers with a way of testing hundreds of chemicals to determine how they interacted with plant immune responses. They found that, while most non-steroidal anti-inflammatory drugs (NSAIDs) boost plant immunity, three oxicam-type NSAIDs suppressed it. Credit: 2022 RIKEN Center for Sustainable Resource Science