Cellulosic Ethanol from Sugarcane in Brazil 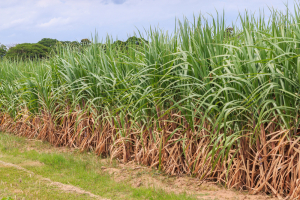 Brazil is a major producer of ethanol from sugarcane, and this leading global position is the fruit of scientific and technological advances resulting from a development program that was initiated in the 1970s. Driven by the oil crises of 1972-1973, Brazil transformed several sugar mills into ethanol producing units that became capable of co-production of ethanol and raw sugar (5). This was technically possible due to the high levels of sucrose in sugarcane and to the development of yeast strains capable of fermenting this sugar efficiently. At the same time, the first automobiles running exclusively on ethanol were introduced, which on the one hand helped Brazil face major world energy crises, and on the other implanted the basis for development of future technologies. Over the following 40 years, Brazilian sugar mills undertook a technological transformation that significantly increased the efficiency of sucrose and alcohol production. This method, now called first generation (1G), has reached a level of 90% conversion of sucrose into ethanol (5). At the same time, advances in sugarcane agricultural technology improved the sugarcane crop to a high level of productivity (averaging 80 tones per hectare). Using intensive breeding programs, a number of sugarcane varieties have been developed that are increasingly better adapted to the diverse climate and soils encountered in Brazil. The result is that Brazil is now the second largest producer of ethanol and the first placed producer of sugarcane in the world.

The necessity to produce second-generation ethanol

Until 2006, Brazil was the only country to produce and use ethanol on a large scale as a fuel alternative for cars. Since then, increased public awareness and governmental focus around the world on issues related to climate change and the excessive use of fossil fuels has led to increased interest in the use of renewable energy. It was at this moment that Brazil, with its highly efficient sugarcane bioethanol sector, became a leader worldwide in the production and use of renewable energy. Nevertheless, production of 1G bioethanol was already at the limit of efficiency both from industrial and agronomical viewpoints.

It was in this context that the Brazilian scientific community and the Federal and State of São Paulo governments took the initiative in the search for ways to increase production of sugarcane ethanol beyond current limits. An idea that was already being revived in several places in the world was the possibility to produce ethanol from sugar polymers, including cellulose, present in cell walls of plants. This search for ‘cellulosic ethanol’ is generally referred to as second-generation (2G) ethanol. Although establishment of 1G technology was highly successful, the potential for ethanol production from 2G is much higher because energy accumulated in sugarcane in the form of sucrose represents only 1/3 of the total. The other two-thirds are distributed equally between the bagasse (stems) and the leaves.

At first sight, the idea of producing ethanol from biomass seems straightforward: it would be enough to convert cellulose to free sugars that could be fermented by yeast. Although many advances have been made in this area, this problem is far from being solved, and developing 2G processes that are economically viable has proven to be a major challenge. The plant cell wall is composed mainly of carbohydrates in the form of polysaccharides that associate to form a supramolecular structure where polymers aggregate through non-covalent linkages. Some polysaccharides are branched with phenolic compounds (ferulic an p-coumaric acids). Ferulic acid can dimerize interlocking polysaccharide chains or these can still undergo polymerization with other phenylpropanoids, including p-hydrocinammic, sinapyl and coniferyl alcohols, forming lignin. Together, the supramolecular structure of cell-wall polymers constitute the main obstacle to enzymatic hydrolysis. Furthermore, known hydrolytic enzymes have molecular sizes that prevent their penetration into the polymer matrix. Therefore, when a mixture of enzymes is added to the surface of the cell wall, the catalytic attack is mainly on the surface of the composite. To perform more complete hydrolysis, enzymatic complexes would have to act in a synergetic fashion on the entire cell wall composite. At present this is not feasible as researchers cannot adequately control the process because very little is known about the synergism between the enzymes involved. One of the principal limitations to understand such mechanisms is that until recently our knowledge of the structure and architecture of the sugarcane cell wall was very limited. 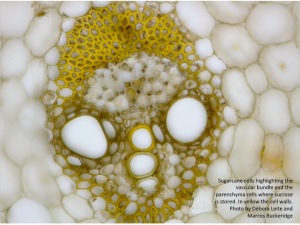 At the biological level, cell wall recalcitrance in plants is thought to be due to the wall’ ability to protect against herbivores and the penetration of pathogens. At the molecular level, the cell wall of sugarcane presents three domains of polysaccharides that interact through non-covalent linkages: the pectic domain, the hemicellulosic domain and the cellulosic domain. The cellulosic domain is embedded within the hemicellulosic domain and both are embedded in the pectin domain. Thus, the basic unit of the cell wall of sugarcane consists of a core with macrofibrils (agglomerated of microfibrils) of cellulose strongly linked to structurally complex hemicelluloses that display a glycomic code, the complex branching pattern of these compounds (2). In addition, this core of polysaccharides is surrounded by an agglomerate of polymers that interact with themselves. Phenolic compounds are also thought to interlock the three polysaccharide domains so that the covalent linkages are protected, effectively sealing the whole unit and creating a structure that is extremely resistant to mechanical, chemical and biochemical degradation.

Several publications produced by the research labs of the National Institute of Science and Technology of Bioethanol (INCT-Bioetanol – www.inctdobioetanol.com.br) have demonstrated that it is possible to disassemble the cell wall using chemical reagents (4). The procedure consists of initially attacking the phenolic compounds and eliminating them from the wall. This makes subsequent separation of the wall polysaccharides possible via treatment with a series of alkali solutions of increasing concentration (6).

A procedure called pretreatment (chemical and physical treatments with hot water, ammonia, acids and/alkali), eliminates the porosity barrier so that all polymers become accessible to attack by hydrolases. However, the branching nature of hemicelluloses still acts as a barrier and prevents further enzyme attack of the polymer chains. This highlights the necessity of using specific enzymatic complexes in order to produce free sugars that can be utilized for fermentation (1-7). As branched hemicelluloses alter the way polysaccharides are recognized by enzymes, their branching pattern (glycomic code) can alter the interaction between enzyme and substrate, affecting enzyme kinetics and cell wall degradation efficiency. The available data shows that the cell wall of sugarcane displays at least 18 glycosidic linkages, and suggests that approximately the same number of enzymes will be necessary to degrade the cell wall completely (5,6). Nevertheless, this chemical process is extremely complicated, laborious and expensive, and this is therefore not a viable strategy for industry.

The collection of enzymes characterized during the first phase of the INCT-Bioetanol contains practically all the catalytic capabilities needed for complete sugarcane cell wall hydrolysis. For this reason, the Institute has reached a point of prioritizing experiments focused on combining enzymes, forming consortia capable of dealing with each of the limiting factors related to recalcitrance. The possible combinations of enzymes have been proposed (1,6) and during the next phase of the project, these strategies will be put into practice by an integrated group of researchers in a series of experiments that will test this hypothesis.

At the same time, it will be necessary to understand the variability in the structure of the sugarcane cell wall in order to find Brazilian sugarcane varieties possessing structures and architectures that are more amenable to hydrolysis. Although the variation in cell wall composition is relatively limited among sugarcane tissues, one may expect to find considerable variation among the great number of extant varieties. This has been recently observed for Miscanthus and maize, two grass species that are genetically related to sugarcane and with very similar cell walls. Several research groups have concentrated efforts on understanding the role of lignin in recalcitrance and have concluded that this interference is somewhat limited. The reduction in lignin content leads in general to an increase in saccharification in a non-linear fashion depending on the pre-treatment, morphological distribution and the level of lignin aggregation (9), suggesting that other cell wall domains make equally important contributions to the recalcitrance of biomass. Research groups of the INCT-Bioetanol have already obtained transformed sugarcane in which the gene encoding one of the enzymes of lignin biosynthesis (COMT) has been silenced. These transgenic plants have cell walls that are modified, and saccharification tests are currently in progress. During the second phase of the INCT we intend to verify whether such genetic variability also exists in sugarcane and to use this information to obtain varieties in which differences among cell wall composition lead to lower recalcitrance to hydrolysis.

Director of the National Institute of Science and Technology of Bioethanol (www.inctdobioetanol.com.br)