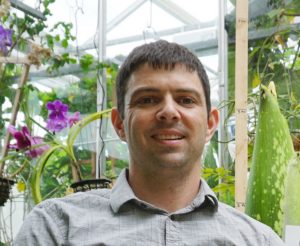 This week’s post was written by Dr Ian Street (@IHStreet), the Resources Editor at AoB Blog. He is also a science writer and plant scientist. His science blog is The Quiet Branches.

On 18th May 2017, plant scientists from all over the world celebrated “International Fascination of Plants Day”. This year, plant enthusiasts could follow events around the world – thanks to social media and live-streaming. Scientists shared live broadcasts about the science they do, the facilities where they work, models from history, about engaging students with plants, and more. Botany Live, organized by the AoB Blog, was an experiment in science engagement supported by the Society for Experimental Biology, The Annals of Botany Company, and Plantae. Overall, thousands tuned in to 31 planned events registered with Botany Live.

Using Periscope and Facebook Live, some reported from dedicated events planned around Plant Day. Others talked directly to the camera and their virtual audience about plants, plant science, and communicating plant science.

The Arabidopsis Biological Resource Center (ABRC) at Ohio State University showed off the facilities and robots they use to maintain both gene stocks and seed stocks. These facilities and resources, which provide essential support for plant research, are often only known within the plant science community. Even there, how they operate on a day-to-day basis remains a mystery to many. Botany Live allowed us to take a peek at the support structures that make international plant science possible. The ABRC videos also showed how plant science is using cutting edge technology with robots to automate seed sorting and gene stocks. 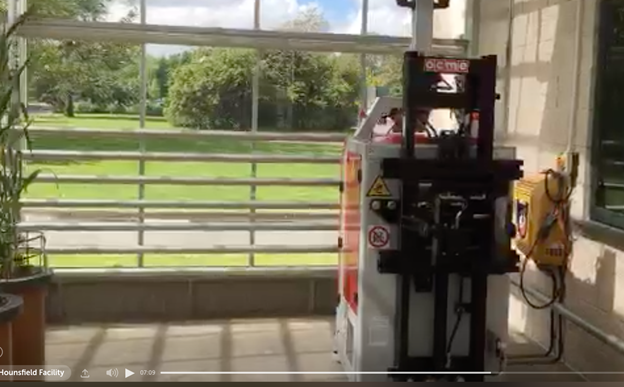 Frame from the Hounsfield Facility Botany Live Broadcast, showing the glass house and the robot that carries individual plants to be scanned.

A tour of the Hounsfield X-ray Facility (@UoNHounsfield) demonstrated the high-tech nature of modern plant science too. The staging the Hounsfield video was clever, as the scientists there clearly set up marks they had to hit to be on camera at certain times demonstrating the three sizes of scanner at the facility. Their live-stream ended with Malcolm Bennett in the glass house talking about the importance of exploring root traits, a big part of what they track at Hounsfield with robots and 3D X-ray tomography.

The National Institute of Agricultural Botany (NIAB) wheat transformation facility broadcast brought us cutting-edge biology directly from the field. Alison Bentley (@AlisonRBentley) guiding us around the facility, where scientists develop and field test new varieties of wheat, followed by a look around their glasshouses. Geraint Parry (@GARNetweets) then interviewed several NIAB conference attendees. A specialized facility for wheat transformation (making transgenic wheat) is, like the ABRC and Hounsfield, a resource of a special capacity to do something technical that not all individual labs can develop. 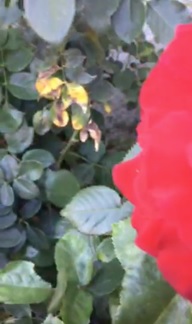 An infected plant in background and flower in the foreground from Monica Lewandowski’s Botany Live Broadcast.

Another outdoor tour of a garden in California was given by Monica Lewandowski. She highlighted the diversity of plants grown in the state’s central valley. She also spoke about some of the challenges that plants face, and why we need plant scientists to study them. It showed the simplicity possible with Periscope broadcasts, as her session focused on just her with planned talking points, a walking path, and her voice-over.

Alun Salt of the AoB Blog brought us some short broadcasts from Kew Gardens. He gave a brief tour of the Wollemi pine, an ancient lineage known only from fossils until 1994. He also gave a quick overview of the garden’s carnivorous plants, including the coolest plant in the world, Darlingtonia californica. 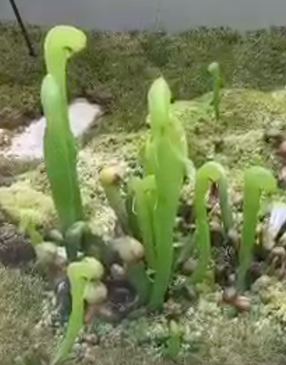 Several Botany Live recordings involved school students. Alistair Culham and Dr M (@drmgoeswild) broadcast a video with students about what they’d done earlier, counting plants and observing them. Many of the students were surprised to learn where pineapples come from: not from a tree, but a bush yielding a single pineapple a year. The Gramene Database (@GrameneDatabase) broadcast a talk with students about plants’ superpowers such as resurrection plants, which can lose 95% of their water and seemingly come back to life upon rehydration. Maria Papanatsiou (@m_papanatsiou) from the University of Glasgow broadcast Plant Day activities engaging students, and many of the videos can be found on the social wall of tweets made for Botany Live.

The most popular Plant Day broadcast was from the Manchester Museum, featuring botany curators Rachel Webster (Manchester) and Donna Young (Liverpool) talking about Brendel’s Plant Models collections from Manchester and the Liverpool World Museum. They’re remarkable models of plants, made of paper mache amongst other materials, created in 1880-1920 by a father/son team in Germany. They were designed to teach plant anatomy and many are incredibly intricate, with some even being able to be taken apart to show specific parts of a flower. 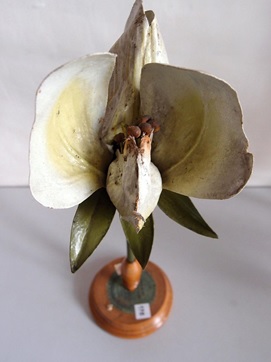 Botany Live broadcasts came from all over the world, and the event can grow in the years to come. The format of live streaming is flexible, with elaborate or simple setups possible. Most broadcasts were under ten minutes, but some lasted almost an hour, and of course, they can be done nearly anytime and anywhere with a good data connection.

This first year of Botany Live was an experiment. With thousands of people reached (and likely more, as many of the videos are still available), it was a success and a boost to the Plant Day events already taking place, extending their reach online. Given the success the Manchester Museum had with their broadcast, more institutions being directly involved will help promote the live broadcasts and engage even more people in the fascinating world of plants.