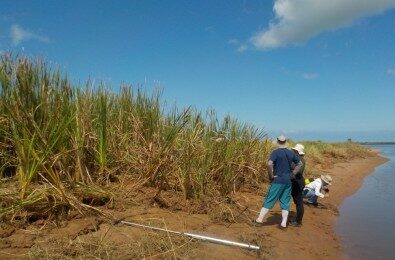 Aquatic plants can be effective in removing contamination of estuary by iron mine tailings, study shows

Brazilian researchers have analyzed the mechanisms by which estuarine plants absorb iron, and used their findings to recommend a promising phytoremediation technique for the rehabilitation of water and soil contaminated by environmental disasters such as the 2015 collapse of the Fundão iron mine tailings dam in Mariana, Minas Gerais state (Southeast Brazil). An article on the study is published in the Journal of Hazardous Materials.

The researchers conclude that Typha domingensis, a reed whose common name is Southern cattail, is effective in mitigating the impact of iron ore tailings (mining waste) on the natural environment.

They conducted fieldwork at Regência in Espírito Santo state, on the mouth of the Doce River near the border with Minas Gerais. The area was inundated by part of the 50 million cubic meters (m3) of tailings released when the dam burst, in the worst environmental disaster in Brazilian history. They analyzed the role of T. domingensis (which averages about 2.5 m in height and has coffee-colored flower spikes) and Hibiscus tiliaceus (often called beach hibiscus, a 4-10 m tree with yellow flowers) in the biogeochemistry of iron and their potential involvement in phytoremediation, the use of living plants to clean up soil, air, and water.

Forty-one towns in Minas Gerais and Espírito Santo were affected when the dam burst on November 5, 2015, and 19 people died. The toxic waste is estimated to have contaminated 240.8 hectares of Atlantic Rainforest and killed 14 metric tons of fish. Many projects and programs have been launched since then to try to mitigate the damage.

“Our study concluded that T. domingensis was more efficient than H. tiliaceus because its root system had far greater acidification capacity, and also because it accumulated more iron in the aerial portions. This is an important finding for future phytoremediation strategies,” said Tiago Osório Ferreira, last author of the article. Ferreira is a professor in the Soil Science Department of the University of São Paulo’s Luiz de Queiroz College of Agriculture (ESALQ-USP).

“Iron accumulation by T. domingensis and its remediation potential are good news. Besides accumulating more iron in the aerial portions and being easier to manage, it’s also preferable to H. tiliaceus because it grows faster,” Prof. Ferreira told Agência FAPESP.

The group is ahead of others in its research, he said, because of the connection made between soil geochemistry and biology with consistent results, focusing on iron and trace elements such as nickel, chrome, copper and lead, which can be a source of environmental pollution even in low concentrations.

Iron is abundant and a key nutrient for plants. It is rarely perceived as a pollutant, but in waterlogged soil with low oxygenation, as in the case of the estuary, microorganisms may use organic matter and iron oxide to obtain energy in a process leading to dissolution of oxygen and release of potentially toxic substances. In this manner, contaminants can enter water, soil, plants and animals, affecting ecosystems and constituting an environmental hazard.

To adapt to a flooded environment, a plant must oxygenate its root system, responsible for anchorage as well as ingestion of water and mineral salts. It does so by capturing oxygen from the atmosphere via its aerial portion and transferring the oxygen to the roots via porous tissue called aerenchyma. When the oxygen comes into contact with iron, it oxidizes and forms iron plaque on the roots, creating a barrier.

T. domingensis has a large system of roots and aerenchyma, so that oxygenation and iron plaque are also substantial. The researchers measured 3,874 milligrams of iron per kilo of dry matter in the plant, up to ten times more than in H. tiliaceus.

“On our first fieldwork expedition to the Doce River estuary, in 2015, there were still islands without vegetation and with an abundance of sand. After the flood of tailings from the Mariana disaster, many of these islands became colonized by plants, and later there was substantial growth of cattails,” Ferreira said, noting that the researchers have been studying the area for more than six years.

He recalled that the Group for Studies and Research on Soil Geochemistry at ESALQ-USP have been publishing other studies on the same area, citing one led by Hermano Queiroz and also supported by FAPESP. This showed that manganese was steadily leaching from the soil into the water even two years after the tailings arrived and detected high levels of manganese in two species of marine catfish routinely consumed by the local community (Cathoropus spixii and Genidens genidens).

“After all these years of research, we’re able to design phytoremediation strategies with more confidence and consistency,” Ferreira said.

Armanda Duim Ferreira is currently conducting two field experiments. One of these entails testing ways to increase cattail biomass production and the amount of metal absorbed by the plant. The strategy combines the use of organic acids and iron-reducing bacteria with agronomic practices such as ideal harvesting frequency, planting density and fertilization with the aim of reducing the time taken to achieve phytoremediation.

Image: A view of the island colonized by Typha domingensis after the flood of iron mine tailings arrived. The photograph was taken at low tide in August 2019. Credit: researchers’ archive.