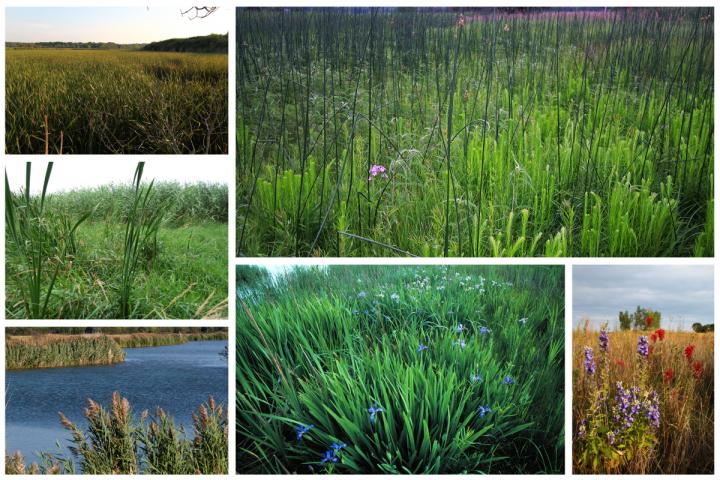 The researchers analyzed 20 years of data collected by expert botanists from hundreds of randomly selected sites in Illinois. This allowed them to track changes in the variety and abundance of different plants in the same locations over time.

The dominant non-natives are not just choking out many other plants, the researchers report. They also have a broad ecological footprint, taking over wetlands on a regional level, rather than just in individual sites. This negatively affects populations of birds and insects that rely on the native wetlands.

“The more dominant they are, the less room is available for other species,” said Illinois Natural History plant ecologist and botanist Greg Spyreas, who conducted the research with INHS plant ecologist David Zaya and colleagues from the U.S. Geological Survey. “These non-natives become more dominant over time and their impact on the rest of the community is fundamentally different,” Spyreas said. “They outcompete better. And that’s across hundreds of sites.”

For example, a European cultivar of reed canary grass has taken hold in many parts of North America. It grows extremely fast, reduces the light available to other plants, produces enormous numbers of seeds and sends out underground stems to quickly colonize a site, Spyreas said.

“It creates this very thick thatch of dead material on the ground that other plants can’t penetrate – but it can,” he said. “It tolerates drought and flooding very well, whereas a lot of native plants cannot.”

Another offender, a non-native common reed, Phragmites, “is notable in its aggressiveness,” Zaya said. It can quickly crowd out other wetland species, including native Phragmites.

Not all non-native plants reduce the ecological richness of wetlands, Zaya said.

Some researchers have hypothesized that it doesn’t matter if a dominant plant is native or non-native: Both can drive down the diversity and abundance of other species, Zaya said.

But the new study shows that dominant, non-native species are much more likely to radically diminish the biological diversity of a locale than their native counterparts will.

“When I see native- versus non-native-dominated wetlands, it looks like two totally different worlds,” Zaya said. “Each native wetland has its own personality, with a different little flower or forb or rare grass or sedge. No two are the same. But the non-native wetlands tend to look alike. They’re the same here as they are in Ohio.”

The data also offer insights into how to best maintain wetland diversity, the researchers said.

“If you have a massive database of wetland plants like we do in Illinois, if you look at the numbers, you can isolate the species that are the most problematic,” Spyreas said. Five non-native wetland plants are on the “worst offender” list, he said: reed canary grass, a non-native cattail, invasive Phragmites and two European buckthorns.

“If you can eliminate those, you’ve eliminated 90 percent of the non-native wetland species problem,” Spyreas said.