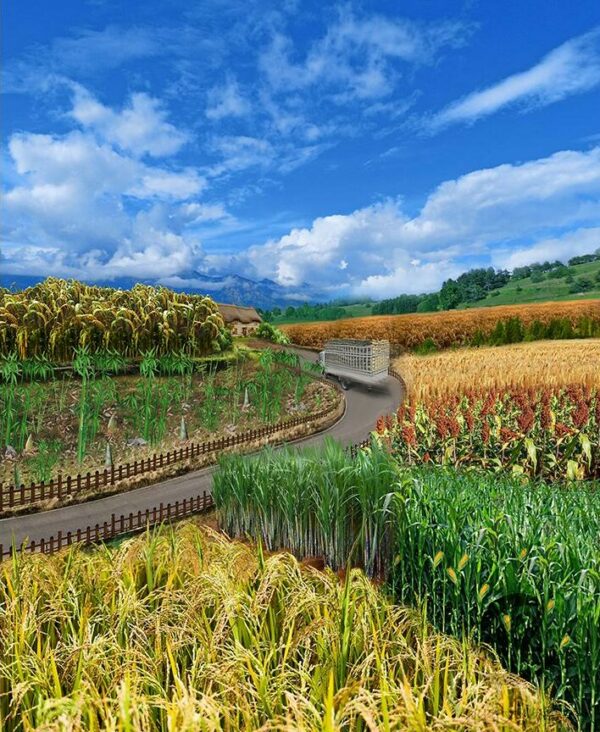 Massive study of the relationships among grasses provides insight to the evolution of a type of photosynthesis involved in heat and drought tolerance.

The evolutionary relationships among grasses — including important crop plants like wheat, rice, corn, and sugarcane — have been clarified in a new molecular study of the grass family tree. Having a clear picture of the relationships among the grasses can help understanding of how important crop traits like seed size or disease resistance evolves and eventually could inform manipulation of these traits to increase crop yields.

The massive study, which includes a sampling of over 350 grass species, also provides evidence that a type of photosynthesis — known as “C4 photosynthesis” — that allows the plants to harness the sun’s energy in hot, dry climates evolved independently multiple times within different grass lineages.

A paper describing the study by an international team of researchers led by Penn State scientists appears online in the journal Molecular Plant.

“The grasses are the fifth largest family of plants with about 11,000 species,” said Hong Ma, Dorothy Foehr Huck and J. Lloyd Huck Chair of Plant Reproductive Development and Evolution and professor of biology at Penn State and the leader of the research team. “These range from the grasses that make up your lawn to food crops that feed humans and their livestock to large woody species like bamboo, and, of course, many, many non-crop species. We collected specimens of a broad sampling of grasses from around the world to build the most comprehensive grass family tree to date using nuclear genes to better understand the evolutionary relationships among these important plants.”

The research team generated transcriptomes — DNA sequences of all of the genes expressed by an organism — for 342 grass species and whole-genome sequences for seven additional species. Combined with existing transcriptome and genome datasets for grasses, the research team compared gene sequences for a total of 357 species, including members of all 12 grass subfamilies and 231 different grass genera — the level of classification just above species.

Like animals, plant cells contain organelles called mitochondria that have a genome separate from what we generally think of as the cell’s genome found in its nucleus. Plant cells also have organelles called plastids — like chloroplasts, which perform photosynthesis— that also have separate genomes. Many previous studies of the grass family tree usually compared the plastid genomes, but for this study, the research team focused on the plant’s nuclear genome, which is larger and inherited from both plant parents.

“To build the grass family tree we compared the DNA sequence of about 1200 genes from the nuclear genomes of the grasses in our sample,” said Ma. “Using the larger nuclear genome, which is made feasible by recent advances in technology that have greatly reduced the time and cost of DNA sequencing, allowed us to make finer distinctions among grass species and resolve relationships that were previously difficult to interpret. We think the relationships among grasses we see in our study are very reliable, but we acknowledge that it is not perfect because we have analyzed only a small fraction of nuclear genes.”

Of the 12 grass subfamilies, the team confirmed that 11 were monophyletic — meaning that all of the members of the subfamily shared a single common ancestor in the past. For the 12th subfamily, the new study suggests that it might be better split into two separate subfamilies. Below the level of the subfamily, some tribes and even genera were also found to not be monophyletic. The study places the overall age of the grass family at about 101 million years using molecular clock estimates that measures time by tracking the number of changes or mutations in DNA sequences, while using fossils to date specific points in the grass history.

“Our study shows that C4 photosynthesis has evolved from C3 independently several times in the grass family,” said Ma. “The evolutionary pathways leading to C4 photosynthesis differ in various lineages by using a different copy of a key enzyme or by having different changes in such a gene. So, if we want to understand C4 photosynthesis in a particular species, it is helpful to know how it is related to other species that use C4. This is true for other traits we might be interested in, and not just in crop species, but also for ecological studies or in model grass species used in laboratories.”

In addition to Ma, the research team includes Weichen Huang, Yi Hu, and Lin Tang at Penn State; Lin Zhang, Yiyong Zhao and Chien-Hsun Huang at Fudan University in China; J. Travis Columbus at the Rancho Santa Ana Botanic Garden and Claremont Graduate University in California; Zhenhua Guo and De-Zhu Li at the Chinese Academy of Sciences in Kunming; Wenli Chen and Song Ge at the Chinese Academy of Sciences in Beijing; Michael McKain at the University of Alabama; and Madelaine Bartlett at the University of Massachusetts, Amherst. The research was funded by the Eberly College of Science and the Huck Institute of the Life Sciences at Penn State, the National Natural Science Foundation of China, the Ministry of Education Key Laboratory of Biodiversity Science and Ecological Engineering in China, and the State Key Laboratory of Genetic Engineering at Fudan University.

Image credit: Artist’s depiction of several important crop plants in the grass family — the fifth largest family of plants with about 11,000 species, including wheat, corn, rice, sorghum, millet, sugarcane and bamboo. A massive new study clarifies the evolutionary relationships in the grass family tree and provides insight into the evolution of a type of photosynthesis — known as “C4 photosynthesis”—in grasses that allows the plants to harness the sun’s energy in hot, dry climates while conserving water. Credit: Yiyong Zhao. All Rights Reserved.