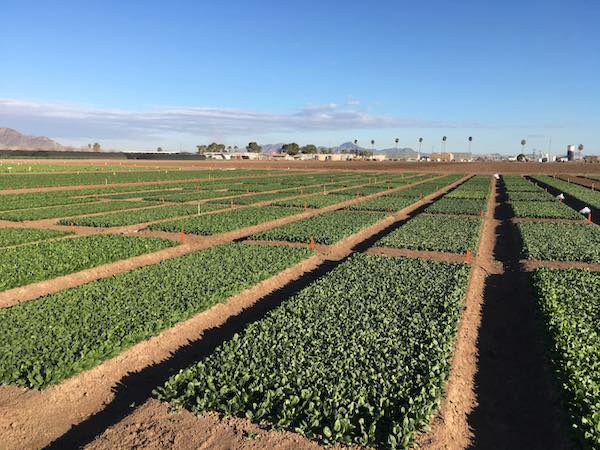 Downy mildew is the biggest threat to spinach production around the world. While the pathogen has a short life cycle (approximately a week), it can produce millions of spores during the spinach growing season. Overhead sprinkler irrigation systems and dew formation on cool nights leads to more moisture, which enables these spores to infect the spinach.

Scientists at the University of Arkansas explored the relationship between available moisture and disease establishment and in a recent article they demonstrated that removing moisture decreased both spore survival and disease. Even a 30-minute dry period reduced spore germination to almost zero. Spores were unable to recover and cause disease on spinach.

In another experiment, they found that the micro-environment of a leaf surface can facilitate spore survival. They covered spinach plants with a spore solution and allowed the plants to dry out for different periods of time. They found that when the spores were on the plants, they were better at surviving in dry conditions but after enough time they found a reduction in disease. They also showed that standing water on leaves is essential for the spores to cause disease. These findings can be leveraged to design better disease management strategies for growers.

“We were also interested in understanding how new races of the downy mildew pathogen originate,” explained Braham Dhillon, the first author of the paper. “The pathogen produces another type of long-lived spore known as an oospore, that can become dormant and survive harsh weather and remain viable in soil for long periods of time. But very little is known about the role of oospores in the life cycle of the spinach downy mildew pathogen.”

Dhillon and colleagues were able to artificially produce oospores in the lab by mating two different strains of the downy mildew pathogen. This is a critical step in trying to determine the environmental factors that control oospore dormancy and germination.

“We demonstrated that oospores are produced abundantly in commercial spinach production areas in Arizona and California, the largest spinach growing area in the U.S.,” said Dhillon. “This was the first direct evidence that different strains of the spinach downy mildew were present, can mate, and produce hybrid progeny in the field and potentially contribute to emergence of new pathogenic races of the pathogen.”