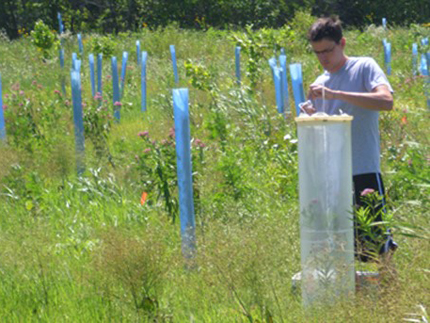 Wetlands are an important part of the Earth’s natural water management system. The complex system of plants, soil, and aquatic life serves as a reservoir that captures and cleans water. However, as cities have expanded, many wetlands were drained for construction. In addition, many areas of land in the Midwest were drained to increase uses for agriculture to feed a growing world.

Draining wetlands disconnected the natural flow and retention of water, a system that had worked well for millennia. One solution to wetland draining was to rebuild these wetlands in another area (more convenient to humans). These are referred to as “constructed wetlands.” In other cases, constructed wetlands are built to rebuild an area no longer used for agriculture.

How these constructed wetlands are built and managed can make a big environmental impact. Karla Jarecke and researchers from several universities have been studying wetlands’ impact on the greenhouse gas methane.

“Globally, wetlands are the largest natural source of methane to the atmosphere,” says Jarecke. “Methane has a much bigger impact than carbon dioxide on global warming – an impact 25 times greater.”

Both natural and constructed wetlands emit methane. Due to their nature – wetlands are, after all, wet – soil microbes and plants are forced to metabolize under anaerobic conditions. And, this leads to methane production.

The soil microbes are responsible for the production of methane in wetlands. The methane then gets to the atmosphere via diffusion, transport through plant tissue, and the episodic release of gas bubbles. The hydrologic stability of wetland soils, as well as the transport efficiency through plants, can affect how much and how often methane is released from the soil.

“Understanding the conditions under which methane is produced and released in wetlands could lead to solutions to reduce methane emissions,” says Jarecke.

The study focused on two common wetland plants and their potential role in methane emissions: swamp milkweed and northern water plantain. Plants and soils were collected from a constructed wetland in Dayton, Ohio. They were then transported to Lincoln, Nebraska to create wetland mesocosms. The Dayton site had formerly been drained and used for agriculture and was rebuilt as wetland in 2012.

The researchers harvested seedlings of swamp milkweed and northern water plantain from the wetland and transplanted them into soils collected in PVC pipe. They covered individual plants with clear acrylic cylinders during gas sampling. This helped them measure and quantify methane emissions from the soil-plant mesocosms. The study was performed in the summer of 2013.

Finding plant species that reduce microbial methane production could be a key to better wetland management. For example, plants that deliver oxygen to the rooting zone can suppress microbial methane production. In addition, future research is needed to understand how varying soil saturation affects methane emissions. This information could be valuable for designing wetland topography that creates hydrologic conditions for increased carbon storage and reduced methane emissions.