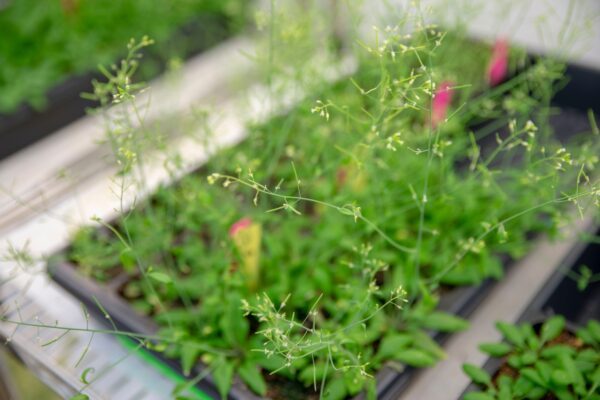 Growing up is a complex process for multi-celled organisms — plants included. In the days or weeks it takes to go from a seed to a sprout to a full plant, plants express hundreds of genes in different places at different times.

In order to conduct this symphony of genes, plants rely in part on an elegant regulatory method called DNA methylation. By adding or removing small molecules called methyl groups to the DNA strand, the plant can silence or activate different regions of its genetic code without changing the underlying sequence.

In a new paper from the lab of Whitehead Institute Member Mary Gehring, researchers led by former Gehring lab postdoc Ben Williams (now an assistant professor at the University of California, Berkeley) tease apart the role of proteins governing this system of genetic control, and reveal how enzymes that regulate methylation can affect essential decisions for plants such as when to produce flowers. “We’re starting to see that there is actually a broader role for  demethylation [in plant development] than we thought,” Gehring said.

In the model plant Arabidopsis thaliana, methylation is regulated in part by enzymes encoded by  a family of four genes called the DEMETER genes. The protein products of these genes are in charge of demethylating, or removing those methyl groups from the DNA, allowing different parts of the strand to be expressed. “You have these enzymes that can come in and completely change the way the DNA is read in different cells, which I find super interesting,” Williams said.

But teasing apart the role of each DEMETER gene has proved difficult in the past, because one member of this gene family in particular, called DME, is essential for seed development. Knock out DME, and the seed is aborted. “We had to design a synthetic gene to get around that,” Williams said. “We had to create plants that would rescue the reproductive failure, but then still be mutated throughout the rest of the life cycle.”

The researchers accomplished this by putting the DME gene under the control of a genetic element called a promoter that allowed it to be expressed in a cell that only existed in the plant during seed development. Once the plant was past the critical point where DME was needed for development, the gene would no longer be expressed, allowing the plant to grow up as a dme knockout. “It was an exciting thing, finally being able to create this knockout,” Gehring said.

Now, for the first time, the researchers could create plants with any combination of the DEMETER family genes knocked out, and then compare them to try and understand what the enzymes produced by each of the four genes was doing.

“It was an exciting thing, finally being able to create this knockout,” Gehring said.

As expected, plants missing any of the DEMETER demethylases ended up with areas of their genomes with too many methyl groups (this is called hypermethylation). These areas were often overlapping, suggesting that the four DEMETER genes shared responsibility for demethylating certain areas of the genome.

“When one of these enzymes is gone, the others are surprisingly good at knowing that they need to step forward and do the job instead,” Williams said. “So the system has flexibility built in, which makes sense if it’s going to be involved in making important decisions like when to make flowers. You’d want there to be multiple layers of responsibility, right? It’s like in an organization, you don’t want to load all responsibility on one person — you’d want a few people who can take on that responsibility.”

Williams hypothesizes that while the DEMETER enzymes could step in for each other when needed, each specialized in demethylating DNA in particular types of plant tissue. “If you look at the protein sequences,they are actually really similar,” he said. “What’s different about them is they’re expressed in different cell types.”

A crucial finding of the study came about when the researchers knocked out all four genes in the DEMETER family at the same time. “All flowering plants have this really important decision of when to make flowers,” Williams said. “For plants out in the wild, that decision is usually dependent on temperature and pollinators. What we found really strange is that these mutants just flowered straight away. It’s almost like they weren’t even putting any effort into the decision. They made a few leaves, then boom, flower.”

When the researchers dove deeper, they saw that one area of the genome in particular that controls flowering time is under very careful and continuous regulation by methylating and demethylating enzymes. “We don’t really know why they’re doing that,” he said. “But when you knock out the demethylases, that gene just becomes methylated, and it’s then switched off. And that just sends plants into an automatic flowering state.”

In the future, the researchers plan to investigate other outcomes associated with their quadruple knockout of the DEMETER genes. “When we knocked out all four of the enzymes, it led to a lot of interesting phenotypes and tons of stuff to study,” Williams said. “We’ve learned through doing this that with DEMETER, like many gene families, we had to knock out all the players to find out the importance of what they are doing.”

Gehring will continue the research at Whitehead Institute. Williams recently started his own lab at the University of California, Berkeley. “I feel very lucky because this project has given me two or three different avenues that I can pursue in my new lab,” Williams said. “It has opened a lot of doors, which is very rewarding.”

More information here
X
We use cookies to ensure that we give you the best experience on our website. If you continue to use this site we will assume that you are happy with it.OkNoPrivacy policy