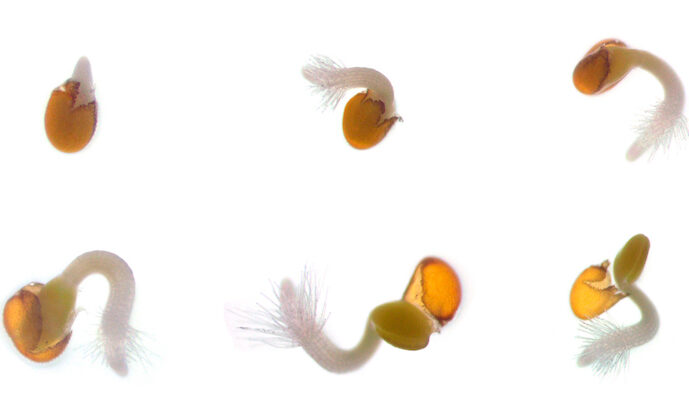 The young plant’s pantry does more than just feed it

A research team has observed that the role of plant tissue – the endosperm – is not only to feed the seed but is crucial for the development and protection of young plants.

The endosperm, the tissue surrounding the plant embryo in the seed, has long been perceived as a nourishing tissue that is abandoned once the transition to the seedling is complete. A Swiss team, led by scientists from the University of Geneva (UNIGE), has now shown that the endosperm also plays a key role in the proper development of the seedling after germination. It acts notably on the formation of the cuticle, a protective layer essential for the survival of plants. Biologists found that these new functions attributed to the endosperm are independent of its capacity to provide nutrients and are mediated by the production of specific molecules. This work can be read in the journal Developmental Cell.

The endosperm (in brown on the left picture, and absent on the right picture) is necessary for the good development of the seedling. Credit: UNIGE

Seeds are composed of three parts: the embryo, which will develop into a seedling, the endosperm and the seed coat, which is the outer protective envelope. The endosperm, which contains nutrients and is often compared to the placenta of mammals, can occupy the largest volume of the seed. This is the case for wheat, rice, corn and other seeds whose endosperm is an essential part of the human diet. Nevertheless, in some flowering plants, the nutrient reserves are mainly in the embryo while the endosperm is a minor component of the seed. This raises the question of the biological role of this tissue in these species and in particular in the seeds of Arabidopsis thaliana, a model organism for research in plants.

The group of Luis Lopez-Molina, professor in the Department of Botany and Plant Biology at the Faculty of Science of the UNIGE, is interested in the control of germination. His laboratory had shown that the endosperm plays a role in the development, rather than the nutrition of the plant, by controlling germination. Indeed, as long as the conditions are not favorable to the seedling, germination is blocked, and the seed remains dormant under the effect of a plant hormone produced by the endosperm.

Without endosperm, the seedling dies

Biologists investigated further the biological function of the endosperm by exploring whether it could control additional developmental processes during the seed/seedling transition. They dissected Arabidopsis seeds at different stages of germination to isolate the embryos. The team found that in the absence of the endosperm tissue, the embryos produce abnormal seedlings that stop growing very early, being unable to develop either a functional photosynthetic apparatus or root, even if nutrients were added to the culture medium. In contrast, embryos extracted from seeds at the same stage, but deposited on a bed of endosperm modified not to produce nutrients, develop normally. “These observations indicate that the endosperm influences the development of the seedling, independently of the nourishing role usually attributed to it”, comments Julien De Giorgi, researcher in the Department of Botany and Plant Biology and first author of the study.

The endosperm, necessary and sufficient to form the cuticle

Seedling development encompasses many processes, and the scientists focused on one of them: the development of the seedling cuticle. This waterproof waxy layer on the stem and leaves, protects the plant from stresses such as dehydration by preventing water evaporation, or pathogen attack. The authors of the study showed that the cuticle forms rapidly during the seed/seedling transition, but only if the endosperm is present. Through biochemical, microscopy and genetic analyses, the team of biologists have identified two molecules produced by the endosperm involved in this process.

“Beyond its active role in cuticle formation, our observations indicate that the endosperm releases other molecules that orchestrate different aspects of seedling development. Uncovering this new role of the endosperm raises questions about its function, beyond nutrition, during the evolution of flowering plants. The identification of the molecules released by the endosperm allowing the proper development of the seedling is also of potential interest for agronomy”, concludes Luis Lopez-Molina.