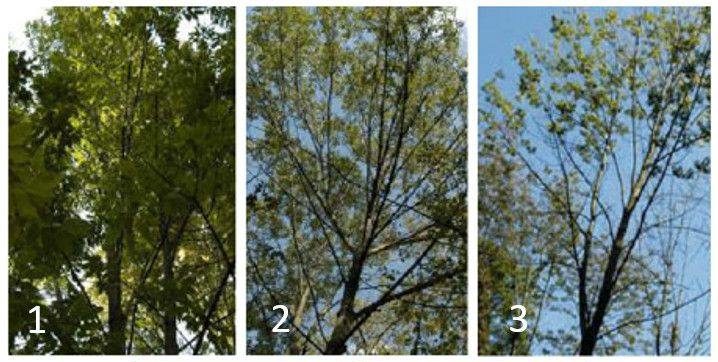 Genes in green ash trees that may confer some resistance to attacks by the emerald ash borer express themselves only once the tree detects the invasive beetle’s feeding, according to Penn State researchers.

Knowing this, geneticists may be able to selectively breed trees to strengthen them and perhaps move the resistance response earlier to ward off the beetles’ onslaught, explained John Carlson, professor of molecular genetics.

Green ash, an ecologically and economically valuable tree species native to eastern and central North America, is under severe threat from the rapid invasion of emerald ash borer, a wood-boring beetle native to Asia. Penn State scientists and others are trying to save the species.

Prior observations in a green ash provenance trial — an experiment to see how plants adapt — planted at Penn State in 1978 by Kim Steiner, professor of forest biology and director of The Arboretum at Penn State, and colleagues in the U.S. Forest Service, show that a very small percentage of ash trees survive emerald ash borer infestations, seemingly because their tissues do not nourish and perhaps even sicken the beetles.

“Emerald ash borer probably entered the provenance trial unnoticed around 2008 and trees started showing symptoms of attack by 2012,” Carlson said. “All but eight or nine of the approximately 1,800 trees that Kim planted have subsequently been killed by the beetles.”

Ash trees succumb after adult beetles lay eggs on their bark. When the eggs hatch, the larvae bore into the bark and feed on the transportation tissues of the tree. This disrupts the movement of nutrients and water within the tree, girdling it and causing death.

The researchers found that the gene expression response in the inner bark of resistant trees is induced by emerald ash borer attack, rather than being always present, noted Di Wu, who conducted her doctoral dissertation in Carlson’s lab and is now a bioinformatics scientist in the Genomics Research Core Facility of the Cedars-Sinai Medical Center, Los Angeles.

To identify which of the genes activated by emerald ash borer attack are most important in resistance, the researchers are now looking for gene sequences that differentiate resistant from susceptible trees.

“The first step in this process was to construct a genetic linkage map with sequences from as many genes as possible, including those induced by emerald ash borer attack,” Wu said.

The researchers are examining a genetic map that includes more than 4,000 genes, and have established a field trial with green ash seedlings to await natural infestation of emerald ash borer and reveal which trees are resistant and which genetic loci in those trees are responsible.

The genetic seedlings are about five years old and are growing on the University Park campus on the site of Steiner’s green ash provenance trial.

“The trees now vary in height from less than a foot to more than 4 feet, and we hope that similar variation in susceptibility to emerald ash borer attack will be revealed as well,” Carlson said. “The mapping family was actually produced from a cross by the U.S. Forest Service of a resistant tree previously discovered in Ohio, not one of the remaining trees in Dr. Steiner’s study.”

Ironically, Carlson can only wait for the emerald ash borer to infest his field trial before he can continue the research using the genetic map, which was recently published in Plant Molecular Biology.

“I’m not sure how much older or larger the trees will need to be before being hit by the emerald ash borer,” he said. “My guess would be another three years of rapid growth before any of the seedlings will be large enough to be attacked.”